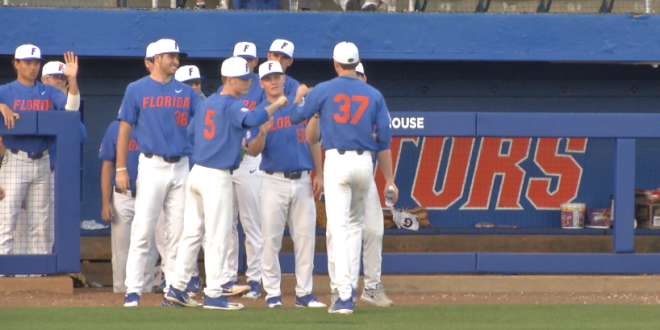 That was the final line of Jack Leftwich’s first start as a Florida Gator and it showed a lot of potential. Leftwich’s great start combined with Wil Dalton’s bat was enough to get the top ranked Gator baseball team past the FAU Owls 6-1 Tuesday night in Gainesville.

To say that Leftwich’s start was good is an understatement. Gator coach Kevin O’Sullivan said that it was one of the best starts a freshman has had during his time at UF.

“It was a really good test for him because it is an older FAU team,” O’Sullivan said. “That’s about a good as start for a freshman that we’ve had.”

Florida was rolling offensively this past weekend and it continued on Tuesday night.

Wil Dalton got the scoring started with a single in the second inning to score Jonathan India. Austin Langworthy then scored on a Nelson Maldonado single in the third inning to extend the Gators lead to 2-0.

India hit his second home run of the season in the fourth inning and Dalton scored on an error, giving Florida a 4-0 lead. After retiring 13 straight batters, Leftwich gave up a walk and a double in the fifth inning. At 63 pitches at that point, O’Sullivan decided to pull him in favor of Andrew Baker.  O’Sullivan said after the game that Leftwich was on a pitch count and will be available on Saturday against Miami.

Baker gave up a run on a fielder’s choice and then benefited from a nice play at third from Jonathan India to escape the jam. From that point on the Gator bullpen put FAU away with 4.2 scoreless innings.

Dalton put the finishing touch on the game in the eighth with his bases loaded single which scored Nelson Maldonado and Jonathan India.

Full highlights coming at you: pic.twitter.com/DdhgXCapHr

Leftwich, who was drafted in the 39th round by the Detroit Tigers in last year’s draft, said that he wasn’t trying to over think his first start because he knew had a solid defense behind him. He attributes the 13 consecutive outs to him trying to stay within the zone and not trying to walk batters.

Dalton said that even though he had a nice opening weekend he wasn’t very comfortable. He said that thanks to his coaches, he has adjusted well and his great play carried over to Tuesday.

No Time For Rest

Florida is back on the diamond Wednesday against Bethune Cookman.  The last time these two teams faced each other was in the NCAA Regional Finals. The Gators beat the Wildcats 6-1 to advance to the Super Regional last year.

Unlike Florida, Bethune Cookman has had a rough start to the season so far as they have lost three of their first four games. On Tuesday night they lost to Jacksonville University 13-8.