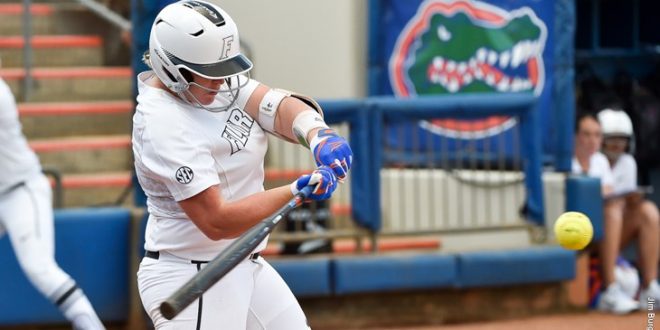 The top ranked Florida softball team improves its record to 10-1 on the season after sweeping a home doubleheader on Wednesday against Oakland University.  The Gators won the opener 6-2 and took the second game 10-0 in five innings.  Florida had just 13 hits combined but starting pitchers Kelly Barnhill and Katie Chronister finished with 20 strikeouts altogether. Catcher Jordan Roberts finished with a team-high four RBI off of two hits.

Game one was similar to last Wednesday’s game versus North Florida where Florida did not get hot until the fifth inning offensively.

The Gators got a run in the bottom of the first inning, due in part to three walks issued by Oakland pitcher Chelsea Wiggins.  Meanwhile Florida starting pitcher Kelly Barnhill was her usual superb self, improving to 3-0 on the season.  She fanned the first six batters she faced and didn’t give up a hit until the fifth inning.  She would leave the game in that inning with 15 strikeouts.

The Gator offense came to life in the bottom of the fifth.  Nicole DeWitt singled because of a spectacular bunt and Kayli Kvistad walked.  Jordan Roberts hit a two run single and Hannah Adams and Jordan Matthews also had RBI hits for Florida.

However, Oakland would not allow Florida to have a perfect game when Madison Jones hit a two-run homer to left-center off pitcher Natalie Lugo.

The next game had a completely different narrative but the same outcome. Florida came out and scored 10 runs within the first three innings. Amanda Lorenz extends her hitting streak to nine games in the inning and she scored the first run of the game on an RBI hit by Nicole DeWitt.  In all, Florida scored seven runs in the second inning to put the game away.  Katie Chronister finished with five strikeouts for the Gators in four innings in the circle and she was delighted with the offensive output of her teammates.

“It’s huge to know that they are going to start their bats early and help us out as much as they can from the get-go. It’s a huge relief for us. We always want to compete like it’s a 0-0 ballgame because we don’t want to let up on a pitch, but when you just have that one run at the beginning of the game, you feel pretty good through the rest of the game because you know something else is going to keep firing up,” Chronister said.

The Gators will remain at home this weekend to play in the Aquafina Invitational including Maryland twice, Illinois State, Iowa State, and Georgia Southern.