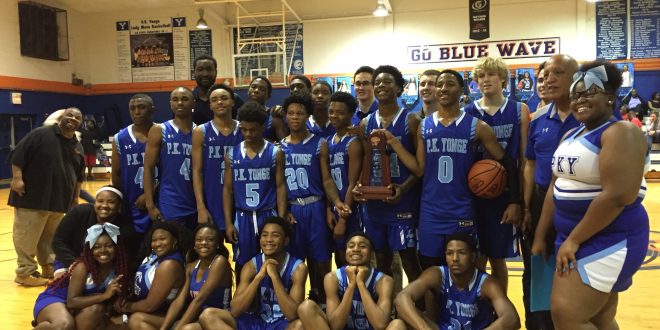 The boys varsity basketball team at P.K. Younge are back in action tonight when they host Bishop Snyder for playoffs. Head coach, Billy Blackmon said he thinks they’re finally playing their best basketball and it’s shows in their defense. A key is the guys working together as a team and with that said, there is no better time for the them to peak.

For coach Blackmon it’s all about setting goals and expectations at the beginning of the season to motivate the young guys, especially during a season like this where they’ve been thrown into a tough schedule.

Back in December during regular season, P.K. Younge fell to Maclay and last week during district finals they got their chance for a redemption.

Coach Blackmon has a few uncommon tricks up his sleeve when preparing the guys for games and watching film. Instead of scouting for them, he’ll have them scout and call the shots on who they need to focus and what needs to get done to shut them down.

Tonight the team face the Cardinals, another team they’re also familiar with. Both teams squared off last year in the same round, where P.K. Younge beat Bishop Snyder by 1. The Blue Waves know they can expect a well-rounded team with good coaching and it won’t be an easy battle coach Blackmon said.

Tonight if they want to walk away with a victory they just need to execute their game plan and focus on key things like boxing out, rebounding, limit them to one shot and out and focus on turning it into more of a half court game, not giving them the opportunity to run away a fast paced game.

Now that they’re in the final stretch, the guys are figuring out what it takes to win and look to show that out on the hardwood tonight at 7 for the region 1 4-A regional semi finals. Tonight’s winner adavances to face the Providence and Tallahassee Maclay winner in the regional finals next Tuesday.

Coming out of their bye week, St. Francis Academy is still looking to get their …