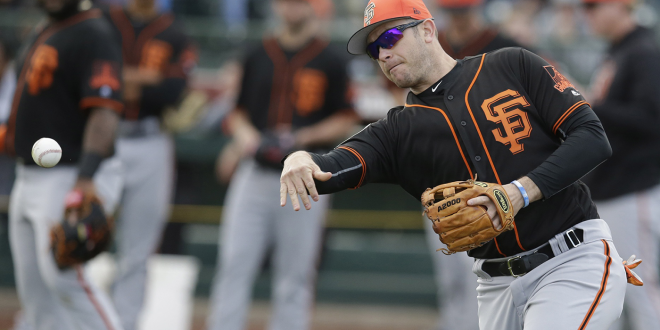 For twenty-nine teams across the MLB, Spring Training is a welcome end to an off-season of disappointment. Perhaps no team is more excited to get back in the swing of things than the San Francisco Giants.

From Worst to First?

Just a few months removed from finishing their 2017 season dead last in the National League West, the Giants are hoping to rid their mouths of the bad taste and prove themselves to be contenders again.

A roster overhaul accompanies the “even-year magic” that Giants fans have seen in recent even-numbered years, and has the Bay Area dreaming of the World Series success that the teams of 2010, 2012, and 2014 brought them.

Among the new faces are former NL MVP Andrew McCutchen and longtime Tampa Bay Rays third baseman Evan Longoria. San Francisco acquired McCutchen from the Pirates in mid-January, hoping to bring life to an offense that ranked in the league’s bottom two in runs scored, home runs, and RBIs.

The Giants hope they see the same outfielder who rebounded from a down season so well in 2017, posting his best power numbers since 2012 and raising his batting average by over 20 points.

Longoria departs Tampa Bay after spending his first ten seasons as a Ray, where he became the face of the franchise and all-time leader in games played, home runs, and RBIs.

Tampa Bay has made it a habit this off-season of unloading talent and salary, and the Giants were more than willing to bring the veteran on board. After months of change and waiting, Longoria is eager to take the field in his new threads.

Throw the new faces in with the likes of Madison Bumgarner, Johnny Cueto, and Buster Posey, and the clubhouse starts looking crowded with talent.

However, the Giants find themselves in a similar situation in the NL West. The division sent three teams to the playoffs last October, headlined by reigning NL champion Los Angeles Dodgers.

The Giants will have work to do to overtake Colorado and Arizona for a playoff berth, but after their first last-place finish since 2007, it’s certainly a welcome challenge.

Only one team enters Spring Training fresh off the celebration, and the Giants are looking to be in that very different place come next spring. Their campaign begins Friday against Milwaukee in Scottsdale.