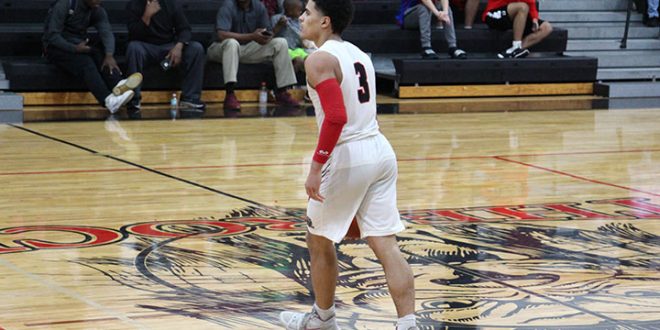 The Rock junior guard Bryan Greenlee looks down the court to make a play. Greenlee finished the game with 31 points, five assists and five steals. Photo by David Street.

The Rock starts off hot, then cools down

The Rock Lions basketball team defeated DME Sports Academy in a thrilling, back-and-forth double overtime game by a score of 85-82 at home in Gainesville, Florida. The game, which took place on Senior Night, looked like it was going to be put out of reach in The Rock’s favor as it started off the game up 23-12. Junior guard Trey McCray opened up the scoring with a three-point shot while Jaden Campbell, a 6-foot-4-inch junior guard, led all Lions scorers with five points during that sequence.

However, DME flexed its muscles and closed the half on a 19-6 run. Madiaw Niang, a senior forward from Senegal, Africa, opened up the run with two free throws. Vadim Clanet, a junior forward from Chambery, France, led the way with six points during DME’s run. The Rock would end the first half down 31-29.

Both teams grind it out in the second half

After the game, The Rock head coach Justin Harden gave his thoughts on his team’s gutsy win.

With the win, the Lions will move on to play in the Sunshine Independent Athletic Association (SIAA) State Tournament as the top seed in the North Division. That game starts Tuesday, Feb. 27. An opponent has not been decided yet.

Previous P.K. Yonge looks to eliminate Bishop Snyder tonight in Regional Semifinals for the second consecutive season
Next Pittsburgh Steelers LB Down, But Not Out