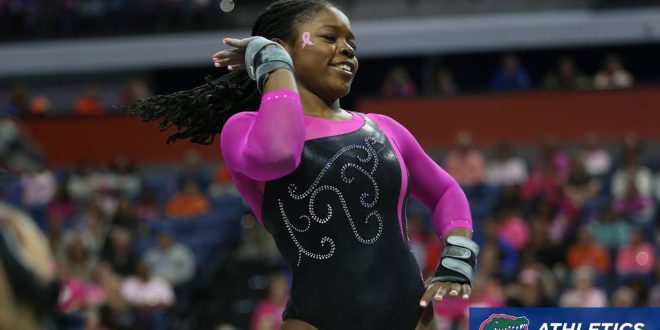 The Florida Gators Gymnastics team will host the Arkansas Razorbacks for the 12th annual Gators Link to Pink Meet. The event is aimed to raise awareness for breast cancer prevention and treatment. This makes it the third consecutive meet that the Gators and the Razorbacks will compete in a link to pink meet against each other.

Florida earned its highest road score of the season last week with a 196.95-196.125 win against No. 14 Georgia. Amelia Hundley and Alex McMurtry equaled their 2018 best on uneven bars with a score of 9.975. However, Alicia Boren won the all-around event title with a score of 39.475. She also equaled her collegiate best of 9.995 on vault.

This meet will be a special meet for Boren. Her aunt who survived breast cancer will be in the audience to cheer her on.

McMurtry made her season floor debut posting a 9.925 and was one of three Gators to score 9.9 or better on floor. Freshman Alyssa Baumann scored a 9.90 and Rachel Slocum, who added the double layout back in her opening pass, earned a collegiate-best 9.95.

Freshman Nicole Webb made her first lineup appearance and earned a 9.725 on beam.

In the same meet that Arkansas posted its season-best team total against Georgia, Jessica Yamzon earned an all-around score of 39.425 setting the Razorbacks top all-around total for 2018.

The Gators Link to Pink meet airs tape-delayed on ESPNU on January 25 at 8 p.m. The announcers include Courtney Lyle and 2009 World all-around champion and Gator Great Bridget Sloan. This will be Sloan’s first call on a Florida meet since she joined the SEC Network/ESPN gymnastics announce rotation last season.