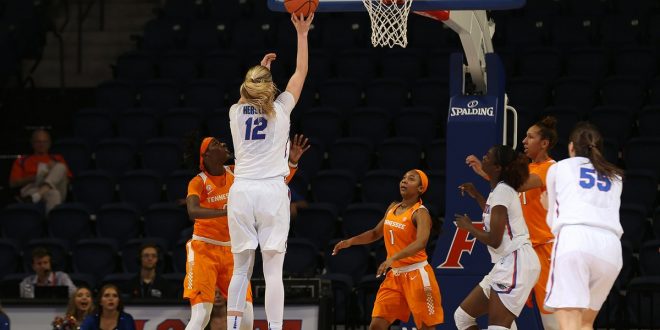 The Gator women’s basketball team did an amazing job Sunday afternoon in honoring the seniors with a win on Senior Day. The goal was to do the same thing Thursday in the senior’s final game at Exactech Arena. The Gators couldn’t complete the storybook send-off for its seniors. Florida falls hard against No. 15 Tennessee 70-42. Several reasons caused this one to go as south as it did, with some being old problems emerging again and the absence of a key contributor.

Early on in Thursday night’s game, the defensive game plan for Tennessee was clear. They wanted to speed up the Florida offense like many teams have done throughout the season. The Lady Vols were successful in their defensive pressure early on. This only set the tone for the game for both teams.

Tennessee took advantage of 25 Florida turnovers by turning them into 31 points. The Lady Vol defenders were swarming to the ball throughout the night.

For the Gators, they were able to overcome the press at times in the first half. They turned the ball over repeatedly but were able to make up for it. Florida trailed by just four, 32-28, at the half.

However, their struggles in combatting the press showed in the second half. Florida players were dribbling into traps and sending passes offline and right into the Tennessee defender’s hands. The Gators were outscored in the second quarter 25-2. The only basket came from senior forward Paulina Hersler, who led the team with 12 points, just under three minutes left in the quarter.

When team’s resort to the full court press against the Gators, the offense for Florida gets sped up and the quality of shot selection diminishes.

For pregame warmups, sophomore guard Delicia Washington turned many heads when she came out in warmup clothes and a walking boot on her left leg. This is to help her deal with the twisted ankle she suffered against Texas A&M just a week prior. She was ruled inactive by Gators head coach Cam Newbauer after shootaround Thursday. This was the first time Washington missed a game during her time with the Gators.

Newbauer remains optimistic that Washington could return Sunday when the team faces Georgia.

Brower and Johnson Step Up

Newbauer had to look down an already depleted bench to see who can step up in Washington’s absence. As expected, coach inserted freshman guard Tameria Johnson into the starting lineup for the first time in her young Gator career. In her first start, Johnson finished with four points, three rebounds and three assists. She struggled at times overcoming the intensity of the Tennessee defense, but so did a lot of the Gators Thursday night.

Newbauer said he noticed Johnson get more comfortable as the game went on.

In December, the Gators added guard Stephanie Brower as a walk-on. She has played sparingly throughout the season, only seeing the floor in blowout situations. With the absence of Washington and Johnson being inserted into the starting lineup, Brower was the first and only guard to come off the Florida bench. She finished with two points, three rebounds and two assists in 24 minutes of game time.

Newbauer said he was proud of Brower’s performance.

Brower said Thursday night was the culmination of months of hard work.

Sunday’s Senior Day win over Vanderbilt appeared to be the perfect ending for the seniors playing in front of the Gator fans. However, they still had one game remaining. The meeting with Tennessee Thursday night was the last game inside Exactech Arena for seniors Haley Lorenzen, Paulina Hersler and Dee Anderson. To commemorate this, Newbauer put them back in the game late in the fourth quarter. He then pulled them just a few moments later. The crowd gave the seniors close to a standing ovation in appreciation for everything they have meant to the program.

Hersler said she enjoyed playing with her teammates and in front of the Gator fans one last time.

After her final home game, Lorenzen got emotional when discussing how much the support of the Gator fans meant to her over her Gator career.

The Gators end the regular season on the road Sunday afternoon in Athens, Georgia. Florida faces the rival Georgia Bulldogs Sunday. Tip-off is set for noon.