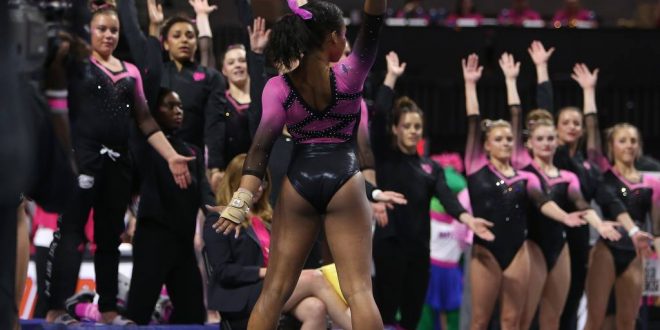 Gator Gymnastics Takes Down Arkansas in Link to Pink Meet

The Gator Gymnastics team beat the Arkansas Razorbacks Friday night in their Link to Pink meet.

Florida started off the night on vault. A stumble on the landing gave Alicia Boren a 9.775. However, Rachel Slocum and Alex McMurtry led the Gators each with a score of 9.950. Slocum tied her season-high with this score. The Razorbacks took the uneven bars for the first rotation. Sarah Shaffer and Braie Speed led Arkansas, each earning a 9.900.

For the second rotation, the Gators moved to the uneven bars. Alicia Boren and Megan Skaggs each earned a 9.900. Rachel Gowey and Alex McMurtry’s 9.925 led the team. Gowey earned herself a new career-high. Arkansas took the vault for this rotation. Braie Speed led the Razorbacks in this rotation, earning a 9.925.

The third rotation had the Gators on beam and the Razorbacks on floor. Rachel Gowey had yet again another career-high score, leading the Gators and earning a 9.950 along with McMurtry. Sarah Shaffer’s 9.925 was the highest score for Arkansas.

For the fourth and final rotation, Florida took the floor and Arkansas took the beam. Sophia Carter earned a 9.875 for the Razorbacks highest score. Florida’s Kennedy Baker injured took a fall in the final performance of the night and injured her Achilles. She will have season-ending surgery next week.

Florida will travel to Missouri next Friday for their fifth consecutive SEC meet. The Gators will take on the Tigers at 8 p.m.

Born and raised at the ballpark! Typically quiet- until it comes to sports. I'm a South Florida native with a passion for baseball nearly as strong as my faith. Grew up in garnet + gold, turned out sporting orange + blue. Likely to be found with a camera. And yes, I take food pictures.
@victoriarossman
Previous SEC Hoops Preview: Vanderbilt hosts Texas A&M
Next Auburn Having Breakout Men Hoop’s Season