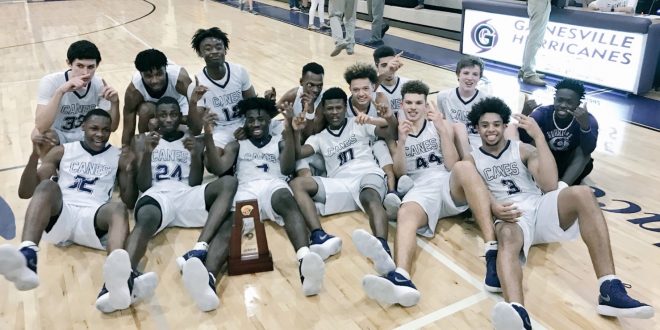 Florida Regional Semifinals for boy’s high school basketball are in full swing. A few local high school teams will represent the Gainesville area in their games tonight. The Gainesville Hurricanes are one of those teams.

The Canes head to Jacksonville to take on Englewood.

Getting to Where They Are Now

GHS fought hard this season to be able to play in the semifinals.

In the first round of playoffs, the Canes played St. Augustine in Gainesville.

Gainesville High was able to keep a steady lead throughout the game. The Canes ended up demolishing St. Augustine 74-36.

Boys Basketball defeated St. Augustine 74-36 in the first round of the state playoffs. pic.twitter.com/3FLbPqbFzW

Canes Head Coach Kelly Beckham told WRUF’s Steve Russell that he’s been very happy with the way his team has played so far in the tournament.

Here are some stats about Gainesville this season:

There are seven seniors on GHS’s team:

These seven players know that if they lose a game, not only will the season end but so will their basketball careers, as none are playing at the next level.

Coach Beckham said that his seniors have shined throughout the season.

“They’ve worked pretty hard throughout the season and you know it’s time to just put everything together and I think they understand that.”

Englewood comes off a very close win over Columbia in the regional quarterfinals, 70-64.

The Rams have a 24-4 overall record and are 8-0 in their district, according to Max Preps.

The winner of tonight’s game will move on to the regional finals and play the winner of the Crestview-Choctawhatchee game.