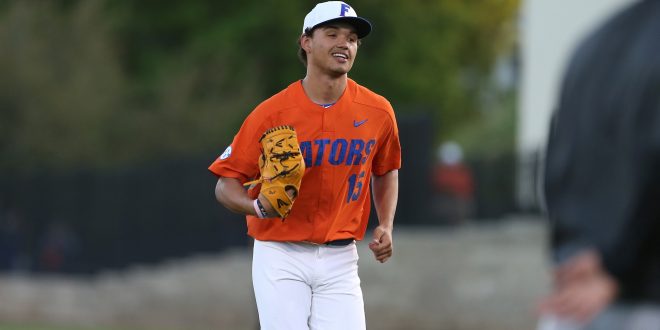 Florida baseball earned its first shutout of the year via a 4-0 victory over the North Florida Ospreys on Tuesday. With the win, the Gators improve to 8-1 on the season and 12-6 all-time against UNF.

Freshman Jordan Butler was phenomenal on the mound, as was UNF starter Frank German. Through the first four innings, the two pitchers allowed one hit a piece. Both starters’ final lines were impressive.

Freshman Jordan Butler with ice in his veins tonight. ❄️

Leftwich takes over in the seventh inning.

Following Butler’s exit, Kevin O’Sullivan turned to fellow freshman Jack Leftwich in relief. He pitched two innings and gave up no runs on two hits. His ERA on the season is now 0.87. Over 31.1 innings pitched so far this season, the Gators’ freshmen have a combined ERA of 1.44.

O’Sullivan turned to All-American Michael Byrne to close the game out. He gave up just one hit in the ninth inning. Byrne is yet to surrender a run or a walk this season.

Keenan Bell sounded the alarm to finally wake up Florida’s hitters in the fifth inning. He rang a leadoff double off the right field wall. After advancing to third on a wild pitch, Bell scored on a Blake Reese groundout, giving the Gators a 1-0 advantage. Reese has a team-high 11 RBI in 2018.

Florida added its second run in the sixth. JJ Schwarz hit a RBI double to bring home Wil Dalton who had reached base on a single. The double was Schwarz’s third of the year. He’s now hitting .412 through nine games.

Nick Horvath added a sacrifice fly in the seventh inning to plate Austin Langworthy and Schwarz would score on a fielder’s choice to give the Gators a 4-0 lead, the eventual final score.

Florida will be back in action tonight against UNF again. This time the Gators will host. We’ll have coverage of the game beginning at 5:55 p.m. on ESPN 98.1 FM & 850 AM WRUF.

I'm an above-average golfer with surprisingly great touch around the greens. Click on my twitter link for some sports talk.
@Ry_McGinn
Previous Hawthorne Defeated in a Season-Ending Blowout
Next Gainesville Boys Basketball Advances