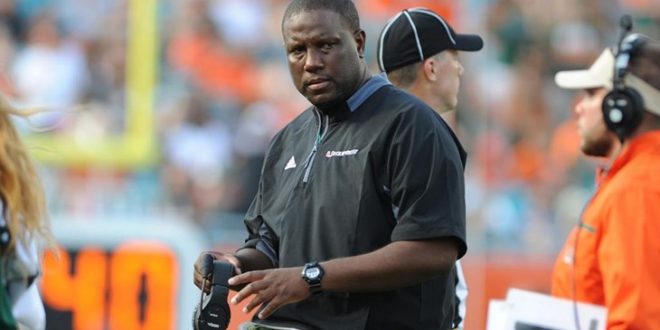 Florida Gator Football head coach Dan Mullen added Larry Scott to the coaching staff as a tight ends coach back in January. Scott is a native of Sebring, FL and has been coaching in Florida for most of his career.

Scott started his coaching career as graduate assistant coach in 2006 at the University of South Florida. He spent 6 years coaching at USF rotating behind the positions of tight ends coach, offensive line coach and running backs coach.

And now he is at Florida as a tight ends coach.

Getting to Know the Team

With his experience at Miami and Tennessee, Scott has had the opportunity to get to know recruits in the state of Florida and in the SEC over the past  couple years. This has allowed him to become familiar with some of the Florida players as he watched them on their high school film and have built relationships with them through the recruiting process. However, he is only familiar with them from that stand point.

Scott says the process of really getting to know the guys on the team and knowing them to their core is going to take some time.

Right now, Scott likes where the players are in the process of off season training. Scott says they are working really hard and giving their best efforts.

Scott is excited about working with Mullen and his philosophy. In Scott’s press conference last week, he talked about Mullen’s philosophy involved tight ends having an active roll in the offense. Scott emphasized Mullen’s love for the use of tight ends, which makes him excited. He is going to have more on his plate, and outs more on his job.

He says he needs to make sure he is recruiting the right guys and then develop to the level they need to compete at a high level and a championship level.

Scott says, “If you can’t recruit, you can’t coach. If you want to be at a high level you have to recruit at that level.”

Scott made it a point to mention that you are only as good as the players and people you surround yourself with.

Sydney is a senior studying telecommunications with a specialization in sports media at the University of Florida. She is a multimedia sports reporter for ESPN 98.1 FM/850 AM WRUF and WUFT-TV.
Previous The Preview: LSU at South Carolina
Next Gator Women’s Basketball Ends Season Following Round One Exit in SEC Tournament