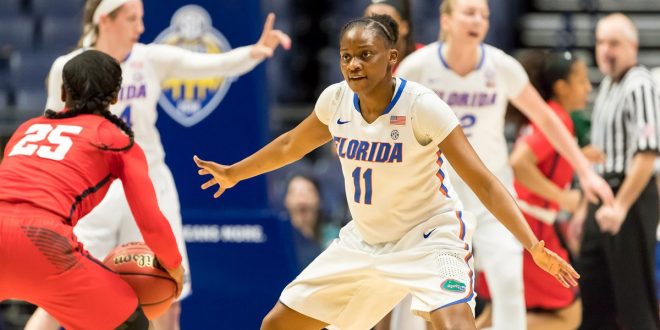 The 2017-18 Gator women’s basketball season came to an end Wednesday afternoon as the Gators fell to Ole Miss 48-43 in the first round of the SEC Tournament. The Florida offense struggled throughout the game Wednesday. The struggles Florida had were due in large part to the intense defensive pressure Ole Miss presented and this pressure forced Florida into costly mistakes throughout the game and put them in a poor position. Many of the concerns throughout the season showed Wednesday in the season finale.

For the Gators early on, it was Paulina Hersler doing the scoring. She had seven of Florida’s first nine points, on 3 of 4 shooting while the rest of the team shot 1 of 14 from the field. The Gators were able to put together a 10-2 run to start the second quarter, fueled by back-to-back 3-pointers from Funda Nakkasoglu and Haley Lorenzen. However, Ole Miss quickly responded with a 15-3 run to close the first half.

The third quarter saw the Rebels really ramp up their pressure. Florida had trouble all afternoon finding a clean look at the hoop. The Gators didn’t take as many threes as we are accustomed to seeing because the Ole Miss defense locked them up from beyond the arc. The Gators finished the game shooting 4 of 12 from three-point land.

Hersler led all scorers with 12 points and 10 rebounds in her final game as a Gator.

Following the season ending loss, Gators head coach Cam Newbauer gave credit to Ole Miss because, “they did a terrific job of really taking us out of what we wanted to do from an offensive end.”

Throughout the season, the Gators have been weak against the full court press. In the season’s final game, only fitting that the press played a major role in the loss. Ole Miss ramped up the press early and the effect lasted the rest of the game. This defensive pressure forced the Gators into several costly mistakes. While some of the mistakes were a direct result of the pressure, some can be placed solely on sloppy ball handling and sloppy passes by Florida.

The Gators had multiple frustrating mistakes in Wednesday’s loss. One mistake saw Florida junior guard Funda Nakkasoglu’s pass to senior forward Haley Lorenzen go off Lorenzen’s face and into the hands an Ole Miss defender, who layed it in easily on the transition. Florida senior guard Dee Anderson tried to get the ball to a wide open Paulina Hersler for the mid-range jumper, but the pass was off the mark. Florida sophomore guard Delicia Washington, who had eight turnovers in the game, dribbled off the back of her leg, causing the ball to go out of bounds. These were just a few missed opportunities the Gators had Wednesday afternoon.

Florida committed 20 turnovers that led to 20 Ole Miss points. These mistakes severely damaged Florida’s chances of advancing to the second round. They were magnified even more because the Gators didn’t have the chance to redeem themselves on the offensive end.

The one consistency with the Gators this season has been the team’s fight. That fight showed Wednesday afternoon for the final time this season. The Gators entered the fourth quarter down by nine points but they made things interesting by cutting the lead down to four with 23 seconds remaining.  The teams then exchanged trips to the charity stripe and the time ran out for the Gators.

Wednesday’s loss ends the first season for head coach Cam Newbauer. The Gators finished the 2017-18 season with an 11-19 overall record and a 3-13 record in SEC play.