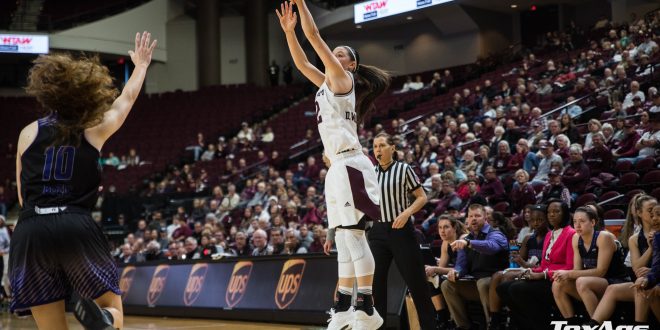 The Texas A&M Aggies take on the Drake Bulldogs in the first round of the Women’s NCAA Tournament on Friday at 2:30.

The fourth-seed Aggies come into the game with a 24-9 record (11-5 SEC) while the 13-seed Bulldogs enter the match-up with a record of 26-7 (18-0 Mountain Valley). Texas A&M is coming off a 70-55 SEC Tournament Semifinal loss to the Mississippi State Bulldogs (32-1). Drake is riding a 21 game winning streak in which they won the Mountain Valley Tournament Championship over the 19-13 Northern Iowa Panthers by a score of 75-63.

Owning a 24-9 record overall, the Aggies have won 17 games by double digits. Texas A&M has also won five of their last seven games with both losses coming to the Mississippi State Bulldogs who just recently tasted defeat for the first time this season in the SEC Tournament Championship. The Aggies also went 15-3 at home. Their highest scoring game this season was against the Arkansas Razorbacks where they scored 104 points and made 41 free throws, which is also a season high.

The Aggies had four players average over ten points per game during the season. Guard Chennedy Carter was the top scorer averaging 21.9 points. Guard Danni Williams and Center Khaalia Hillsman averaged 14.5 and 14.4 points per game respectively. Forward Anriel Howard scored 11.5 points per contest. Carter, William, and Howard also all averaged over 30 percent in three-point percentage with the trio scoring 35.4, 38.7, and 30.3 percent respectively. Hillsman, though, had the highest free throw percentage on the team averaging 60.4 free throws made.

.@ChennedyCarter on being selected as a host for the 1st & 2nd rounds

"I'm just happy to be able to play at home with my teammates." #12thMan pic.twitter.com/cqm2irwjsw

Last season, the Aggies lost to the Mississippi State Bulldogs in the Semifinals in the SEC Tournament. They then went on to win the first round of the NCAA Tournament against Pennsylvania, though they proceeded to lose their next game to the UCLA Bruins.

Texas A&M will host the first and second rounds of the NCAA Tournament.

Previous Jake Arrieta is a Phillie, Lance Lynn is a Twin
Next Mullen Excited to Start Spring Practice