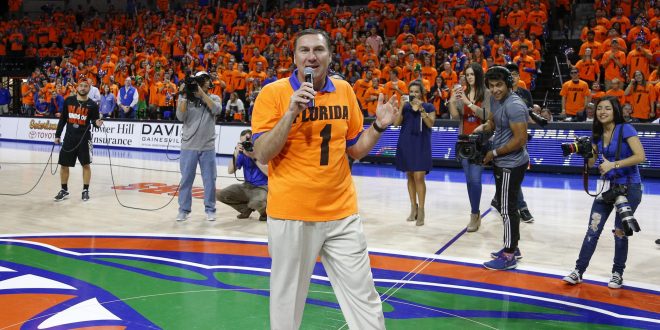 With spring practice right around the corner on Friday, Florida Gators football head coach Dan Mullen took to the podium for his first press conference since National Signing Day.

Mullen expressed his anticipation to “get out there” and “start doing some football.”

“I want to see our players’ reaction,” Mullen said. “Hopefully they’re excited to get out there.”

Mullen said installing the practice mentality early on in spring practice is always the challenge during spring. But, it is more about understanding the flow and speed of practice.

Mullen on the role of coaches with players:

He said the coaching staff already has an aggressive installation plan for the offense in place. The first-year head coach said the team will have all of its offensive concepts installed during the spring.

When asked about the quarterback depth chart he said the spring presents the opportunity for his players, not just his quarterbacks, to earn playing time. Mullen said one thing they will learn is how to play hard.

Mullen – "I know they're going to play hard because they're not going to have an option." #Gators

Mullen mentioned four players who will be limited or out during the spring:

Mullen mentioned teaching his players “the Gator standard” and said it starts with effort and “how you carry yourself as a player.”

More elaboration on the standard:

“These guys came to Florida to play for championships … I think they are excited to do that.” — Mullen

Mullen said the coaching staff is consistently thinking of ways to motivate the players to keep pushing and achieving their goals.

He even had a chance to present his reflections on his years as Florida’s offensive coordinator and why he loves being back in Gainesville as part of the Gator family.

“I love being here,” he said. “Doesn’t mean I’m always going to be happy every day… but being part of the community and part of the university is something I really enjoy.”