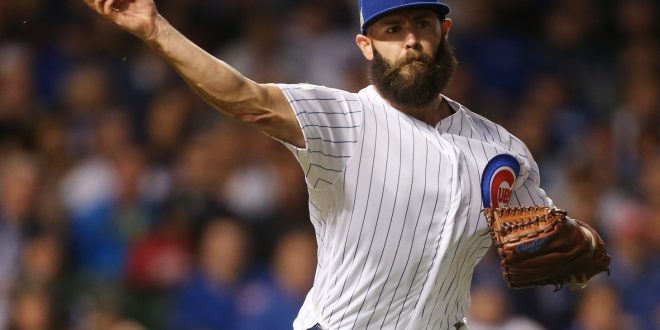 Jake Arrieta is a Phillie, Lance Lynn is a Twin

With Opening Day less than a month away, Major League Baseball kept track of the top 50 free agents. Out of 50 players, 48 of them have been signed. Those among the top ten were Jake Arrieta at No.5 and Lance Lynn at No. 8. Both pitchers signed this week.

The right-handed starting pitcher agreed to a three-year, $75 million deal with the Philadelphia Phillies on Sunday.

Arrieta, the 2015 National League Cy Young Award winner and 2016 MLB World Series champion with the Cubs left a handwritten note expressing how important Chicago is to him and his family.

The right-handed pitcher has agreed to one-year, $12 million deal with the Minnesota Twins. A couple days ago the Twins offered Lynn $20 million for two years, but he rejected it. During his news conference Tuesday, Lynn said the Twins seemed like a perfect fit.

Welcome to the #MNTwins, Lance! pic.twitter.com/XA4fk5aHSq

The 30-year-old pitched a 3.43 ERA over 186.1 innings for the St. Louis Cardinals last year. Lynn had a 3.34 career ERA over 977.2 innings pitched during his six years with the Cardinals. The Twins also have signed big-hitter Logan Morrison, pitchers Zach Duke, Michael Pineda, Anibal Sanchez, Addison Reed and closer Fernando Rodney, and another starter, Jake Odorizzi.

Great start for Lance in a #MNTwins uni! pic.twitter.com/uhdWbdnG8n

Lynn started and pitched three innings against the Baltimore Orioles on Tuesday. He struck out five, walked one and gave up no hits.

Kate Venezio is a fourth-year telecommunication-news student at the University of Florida. Kate does it all: Behind the camera she captures emotional moments as a photographer for the University of Florida Athletic Association. She's comfortable being in front of the camera, too. Kate interviews players, coaches, fans and family members for pre- and post-game coverage as a beat reporter for ESPN Gainesville/WRUF-FM. In addition, Kate produces the sports segment for the weekly WUFT News program. There, she's responsible for writing the script in its entirety to include production commands. The presentation includes video highlights and interviews taped and edited, and Kate then live anchors the final package on a daily deadline. In addition, she writes stories for wruf.com where she informs sports fans of local, state, and national trending topics. Kate also utilizes social media as a tool to help get the stories in front of viewers.
@@kate_venezio
Previous NFL Free Agency
Next Texas A&M Women’s Basketball in NCAA Tournament