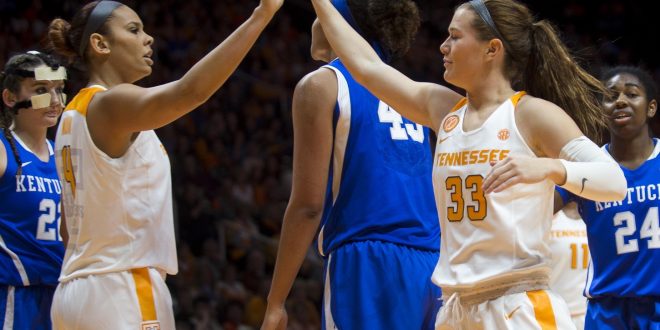 There have been 37 NCAA women’s basketball tournaments and the only team that has appeared in every single one? The Tennessee Volunteers. They haven’t been in a Final Four in 9 seasons and they are hoping to make a visit there this year.

Monday night, the 2018 NCAA Tournament bracket was announced and the Lady Vols were given a No. 3 seed. They will host the first and second round of the tournament with their first game against Liberty University this Friday.

The final Associated Press rankings came out on Monday and the Vols are sitting at No. 12 and now have a record of 24-7.

First and Second Round Notes

Tennessee’s No. 3 seed in the Lexington Regional will give them the opportunity to host the first and second rounds of the tournament. The three other teams traveling to Knoxville are No. 6 seed Oregon State, No. 14 seed Liberty University and No. 11 Western Kentucky.

If Tennessee wins Sunday, they will advance to play in Lexington, Kentucky.

It’s not an NCAA Tournament without filled out brackets, predictions and upsets. Since Tennessee has made it to 37 consecutive tournaments, they are looking to make another run at the title. Tennessee has won eight National Championships with their last one being in 2008.

Tennessee’s No. 3 seed is their highest seed in three years and the last time they were a No. 3 seed was in 1997 where they went on to win their fifth National Championship.

The women will “go dancing” this Friday and the 2:30 game will be aired on ESPN2.