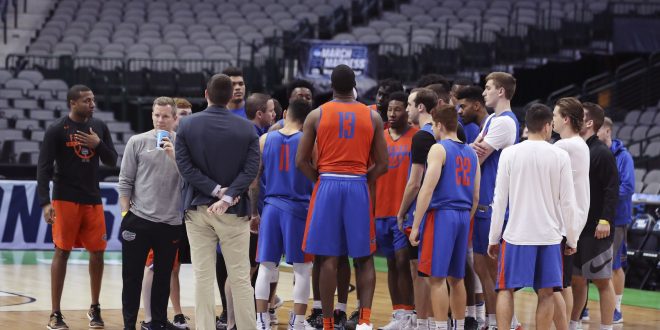 After an excellent play-in game on Tuesday night, the Florida Gators will take on the St. Bonaventure Bonnies on Thursday night at 9:57 p.m. in Dallas on TruTV. The Bonnies knocked the UCLA Bruins out of the NCAA Tournament in their First Four play-in game, 65-58.

KenPom is projecting a 74-70 Florida win over St. Bonaventure.

The Gators are 2-0 all-time against St. Bonaventure in school history. The two squads met most recently a season ago in Lakeland while Exactech Arena was still under renovations. The Gators won that game 73-66, scoring the final seven points of the contest. The only other game between UF and St. Bonaventure took place on December 29, 1977. The Gators won that game in easy fashion, securing an 88-75 victory.

“[They have] arguably one of the best backcourts in the country, both offensively and defensively,” White said. “And then they’ve got complementary pieces, too, that I think provide defense and rebounding. [They] play within themselves, hard to block out, really good in zone, provide some physicality…Coach Schmidt has done an amazing job there, of course, but just how tough they were and how hard they play, and I thought that was shown against last night.”

White called Courtney Stockard the difference in the St. Bonaventure-UCLA game. Stockard, a JuCo transfer, went for 26 points and 4 rebounds vs. UCLA.

Jalen Hudson on Florida’s commitment to defense and on moving past the Arkansas game:

St. Bonaventure has one of the most dynamic backcourts in the country led by Jaylen Adams and Matt Mobley. Adams is a 6’2”, 190-PG who can score from any level of the floor. He was named A10 Co-Player of the Year, along with Davidson’s Peyton Aldridge, and is averaging 19.8 points, 5.4 assists, 3.6 rebounds and 1.5 steals per game on 45.4% shooting from the floor and 45.7% shooting from long-range. On top of his terrific metrics on both ends of the floor, Adams is averaging 37.3 minutes per game. The senior has played at least 37 MPG in each of St. Bonaventure’s last three seasons. If the Bonnies want to win this game, they’ll need Adams to get hot and play his best basketball. Adams is only sinking 25.8% of his shots from the floor and 31.6% of his attempts from downtown in St. Bonaventure’s last two contests. They’ve been able to overcome his sub-par shooting performances as of late, but he’ll need to be at his best against Florida.

Next up is Adams’ partner-in-crime, Matt Mobley. Both Adams and Mobley were named to the All-Atlantic 10 First Team. Like Adams, Mobley plays over 37 MPG. Unlike Adams, he’s only been at St. Bonaventure the last two seasons as he transferred into the school from Central Connecticut State University after his sophomore year. Mobley is recording 18.5 points, 5.0 rebounds and 2.5 assists per game this season. He’s also making 42.7% of his shots from the field and 38.3% of his three-pointers.

As a whole, St. Bonaventure ranks 65th in offensive efficiency and 75th in defensive efficiency. While the Bonnies don’t take many three-pointers, the ones they do take usually go in at a high clip. The Bonnies have hit 39.3% of their shots from downtown this year, which ranks 25th in the nation. While UCLA may have given UF a tough time in the interior, St. Bonaventure is a smaller team, like Florida, and struggles to score in the paint and surrounding areas. The Bonnies’ most common lineup over the past five games of Jaylen Adams, Matt Mobley, Idris Taqqee, Courtney Stockard and LaDarien Griffin has an average height of 6-feet-4.2 inches. St. Bonaventure is only sinking 48.5% of their shots from two-point range, which ranks 231st in the NCAA.

Chiozza said the guys who were at UF for the NCAA Tournament run last season are trying to do everything they can to get the guys who haven't been in the tournament before mentally ready for what's ahead.

Chiozza on getting his teammates who haven’t been to the NCAA Tournament mentally ready:

The Gators have had one of the most roller-coaster-like seasons in all of D1 college basketball. Despite finishing Top 5 nationally in Quadrant I wins, Florida ended the season with 12 losses and encountered two separate three-game losing streaks throughout the course of the year.

On this current Gator roster, KeVaughn Allen, Chris Chiozza, Gorjok Gak, Keith Stone and Kevarrius Hayes are the only players with in-game NCAA Tournament experience. Egor Koulechov went to the Big Dance his freshman year during the 2013-2014 season with Arizona State, but saw no playing time with the Sun Devils in the team’s first-round defeat to Texas.

Mike White on getting his team going and firing them up.

“It’s just really hard to tick these guys off. I’m going to give you an example. There’s a bunch of stuff that hits the media, whether it be social media or television media, that everyone is picking whoever wins this game, they’re going to beat Florida, right? We all know it. Why would I not use it? Whether it works or not, who knows, with this group, we showed it, and we showed it this afternoon before practice because I thought it might lead to us having a bunch of edge in practice, and we got off to a horrible start in practice, [it was] quiet. I had to tell my managers to stop cheering our guys on because it sounds like a library in there if they’re not getting after it. It’s just the personality of this team.”

Mike White on his team’s poise stemming from their quiet mentality.

“I probably need to stop fighting it this time of year. It is what it is. But that said, I think that the positive occasionally that we can draw from that type of mentality is this team doesn’t really get rattled, either. This team has got an ability to make plays late down the stretch with poise. Maybe our lack of emotion at times can be a positive.”

Egor Koulechov on his previous NCAA Tournament experience and what he’s looking forward to this year.

“I think what I learned from it the most is probably, not that the seeds don’t matter, but that every team in this field is very good, and you’ve got to respect every single opponent. And I mean, the margin of error is so small. That was a heartbreaker my freshman year against Texas. The guy just picked the ball up, just laid it up…This is the time and this is why I came to Florida, this team, those guys.”

Jalen Hudson on his improvement throughout the season and commitment to defense this year.

“Yeah, my game has changed a lot, both ends of the floor. Still trying to continue to get better every day. Not exactly where I want to be, but I feel like my ceiling is still pretty high. But it’s about us right now, know what I mean? March Madness is always about everybody, it’s not about individual things. It’s going to take everybody tomorrow, so that’s what I’ve been focusing on. Giving as much as I can, being a servant.”

Chris Chiozza on the team’s love of Fortnite and how it has brought them together.

“Any time you can find something that you can share interests with somebody else or a lot of people on the team, we all enjoy playing that game, so we try to play together as much as we can…It’s just a bond that we’ve got just from that, let alone everything else we do together. It definitely brings us a little bit closer together.”