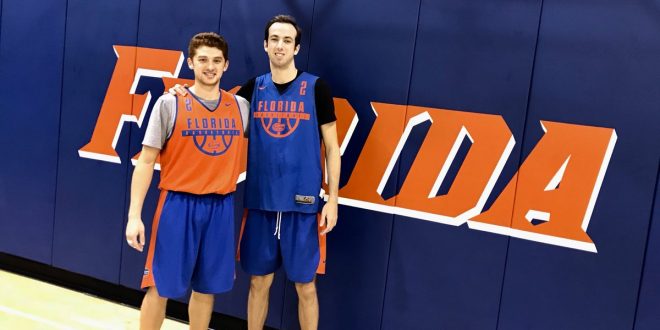 Walk-Ons are Living the Dream at Florida

Mak Krause and Andrew Fava were never supposed to play basketball at the University of Florida. They both had aspirations of walking on, but never thought it would become anything more than a pipe dream.

The Beginning of a Journey

Krause and Fava had offers to play at small Division III schools, but both decided they couldn’t pass up the opportunity to attend the University of Florida. Growing up as die-hard Gator fans, it seemed like the perfect fit for both of them: getting to work as student managers for their favorite college basketball program.

As student managers, they were required to complete numerous hard-working tasks including working players out, cleaning the locker room, doing laundry, cutting up film, grabbing lunch for the team and organizing equipment. Essentially, they completed all of the “dirty” work.

While both still hoped that one day they would be members of the team, they had basically accepted the fact that their basketball careers were over. One aspect of the Gator basketball program gave them the opportunity to showcase their skills, and they certainly did not disappoint.

The Gators have a tradition called “noon ball.” Almost every day at noon, the coaches play the student managers in a game of pick-up basketball. Both had still stayed in basketball shape hoping to make a lasting impression in noon ball, but neither thought impressing the coaches in a simple pick-up game would actually lead to anything other than regular compliments.

They always held a sliver of hope in the back of their minds that one day they would be able to suit up in a Gator uniform and run through that tunnel with the entire O’Dome cheering. That dream had turned to fruition on November 10, 2017. At the end of a team meeting, head coach Mike White told the players he had an important announcement. Then, this special moment happened:

It didn’t take long for Krause and Fava to step on the court. With a 30-point lead and less than 3 minutes left in the Gators’ season opener against Gardner Webb, the two walk-ins were subbed into the game. While neither scored a point or even took a shot, it was a huge moment for both of them.

“Getting to play in front of the Rowdies and actually play when we get in the game in front of them and to hear their support and our teammates support, that’s crazy,” Krause articulated.

Fava went on to mention how hard both of them had worked throughout their lives for this moment.

“Everybody knows the hard work that we’ve put in to get to this point, so everyone’s thrilled for us.”

With the Gators in the NCAA Tournament for the second straight year, Fava talked about the major differences in the manager role as opposed to the student athlete role.

“The experience is so much different. As a manager you’re worried about keeping the players ready to go, whatever we have to do with that, but now as a player, we get to experience everything that happens on the court.”

Krause and Fava know they likely won’t step on the court again this season, but they are just thankful for the opportunity and experience.

“Last year was super exciting, just cause being a part of this program, it was my first time going, but now it’s completely different as a player,” Krause stated. “Being able to play in the NCAA Tournament is a great honor, and I’m just excited to be here.”