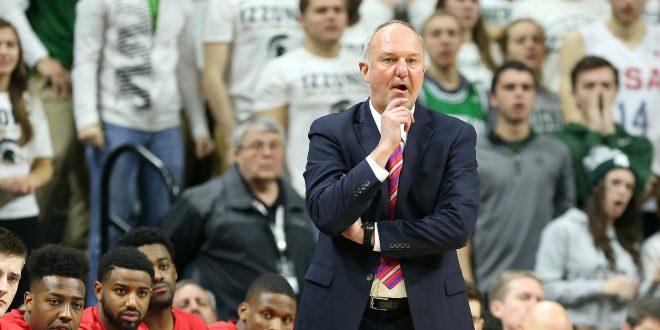 After meeting with school officials in Athens, Georgia, former Ohio State bench boss Thad Matta has reportedly turned down an offer to become the 23rd head coach of the University of Georgia’s basketball team.

ESPN’s Jeff Goodman first broke the news Wednesday afternoon, and according to multiple reports, the 50-year old Matta walked away from a five-year deal worth in excess of $16 million.

“It was the most difficult decision because Georgia is a tremendous opportunity for a coach to build a great program,” he told ESPN. “Unfortunately, I just don’t feel that I am completely ready at this point to give (athletic director) Greg McGarity and Georgia what they deserve.”

Since firing former coach Mark Fox last Saturday, the Bulldogs pressed hard for Matta, spending hours with him on campus on Monday and Tuesday.

He seemingly fit the bill: Over the course of a 17-year head coaching career, the Hoopeston, Illinois, native steered Butler, Xavier and Ohio State to a combined 439-154 record. The three-time Big Ten Coach of the Year also led his charges to 13 NCAA tournament appearances, one more than Georgia’s managed in their program’s history.

The hire, though, never materialized. And as the Bulldogs continue to suffer from the fallout of Fox’s firing — the current team voted against participating in the NIT, while four-star recruit Elias King de-committed from their 2019 class — they need to fill their vacancy fast.

It’s been a long week for the Georgia Bulldogs in the coaching market. Even before Matta’s decision, their first choices — Xavier’s Chris Mack and Texas’ Shaka Smart — reportedly both declined interest in the position.

But despite reaching for a contingency, UGA has options.

Former Marquette and Indiana head coach Tom Crean is now on top of Georgia’s list and will meet with school officials on Thursday. However, the Bulldogs are playing catch-up for his signature against the Pittsburgh Panthers, who interviewed him for their coaching vacancy on Tuesday.

However, after Crean, there isn’t much consensus on Georgia’s plans. DawgNation speculates that the team could eye the College of Charleston’s Earl Grant and former Bulldog Tubby Smith as potential replacements, while the Macon Telegraph identifies Rhode Island’s Danny Hurley as an outside candidate for the spot.

Previous Tiger Woods at Arnold Palmer
Next Round of 64 Preview: No. 11 St. Bonaventure vs. No. 6 Florida