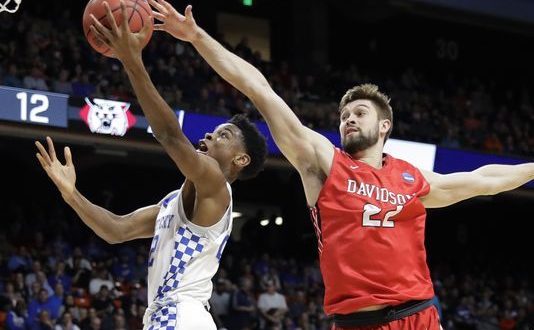 Kentucky Perseveres in the NCAA Tournament

March Madness is in full swing. The 5th seed Kentucky Wildcats took on the 12th seed Davidson Wildcats in the first round of the NCAA tournament and the young Kentucky team got a taste of a tournament win.

Kentucky led the first half with Kevin Knox scoring a game high of 25 points. John Axel Gudmundsson didn’t trail far behind with six three-pointers and 21 points for Davidson.

This was the first time in 1,047 games that Kentucky didn’t make a three point shot. But that didn’t keep them from victory.

Tonight's win was the first time in school history we've won a game without a 3-pointer since the 3-point line was established. Just goes to show you that when we ARE hitting 3-pointers, we're an even more dangerous team. #MarchMadness https://t.co/Ue3IvWxiTc pic.twitter.com/sWOVeNurFj

Kentucky held a ten point lead at half which Davidson responded to with five shots, three of which were three-pointers.

Kentucky defeated Davidson with a close 78-72  score advancing them into the second round of the tournament.

A Good Win for a Young Team

Head coach John Calipari said it was a good win for a young team that didn’t know what to expect in the tournament.

“To play a team that’s as efficient, and an execution team like Davidson, this young team did pretty good,” Calipari said.

Kentucky will take on Buffalo in the second round and Calipari is hoping the team will learn from their second half mistakes and continue further into the tournament.

“If you come out and play like we did in the second half, our season will be over,” he said.

Kentucky and Buffalo will tip off at 5:15 pm on Saturday with coverage on CBS.