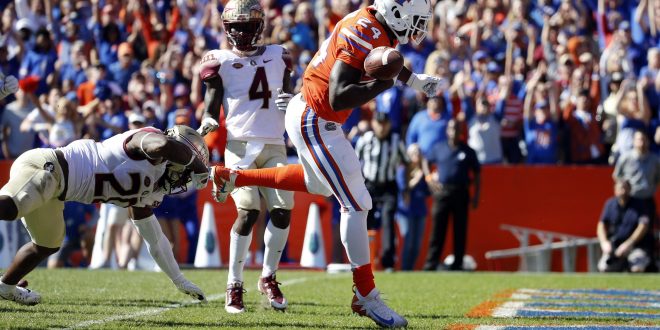 The day has finally come for Florida football athletes, coaches and fans.  Spring practice starts today and fans have the chance to see how the program is changing under head coach Dan Mullen.

Mullen said the first few practices will be spent teaching the team fundamentals.  He wants the players to always hustle on the field whether it’s in practice or a game.

Once the team has a general understanding of how practice is run, Mullen and his coaching staff will start to introduce plays.

He said the team will only learn basic plays, but there are different routes to run off those specific plays that will feed into other plays.

Before spring practice starts, Mullen did not want to pre-judge anyone.  He wants to see how the players will handle his coaching style, but he’s okay if the players aren’t getting it on the first day.  Mullen believes if his players are not understanding, it’s the coaches fault for the way they are teaching it to the team.

Changes Made Before Spring Practice

Since Mullen became head coach, his main priority was changing the mentality of the team.  He’s continued to do this by creating a leadership council for the team, increasing the intensity of spring workouts and making the players accountable for their actions on and off the field.

Mullen is calling this the “Gator Standard” and he expects every one of his players to have it and show it.

Mullen established a Leadership Council as soon as the team reported for the Spring Semester.  The point of the council is to find the leaders of the team so they can change any negative things and keep the positives coming.  The entire team voted and selected eight players to fill the council.

All of these guys represent different positions and different classes.

This council will also help at practice to make sure the team is working as hard as possible and they are leaving everything on the table.

Mullen and his coaching staff expects the team to come ready to play harder than they ever have.

The team is hungry to be a championship caliber team once again.  Mullen wants the team to be ready to go up against any championship team and succeed, which is why he is pushing everyone to the max.

The team is using accountability as motivation throughout practice and training.  The Leadership Council created eight different teams to run drills during practice.  Those teams compete against each other and receive and lose points based on their performance, grades, class attendance, nutrition and other things.

These points are posted in the locker room for everyone to see and they change on a daily basis.  The team with the most points gets more of a say when it comes to choosing team activities.

Both practices are fully open to the public.

Coach Mullen knows fans are ready to see the Florida Gators back on top and his team is ready to show the fan base what they can do.

Nicolette is a senior at the University of Florida who has participated and enjoys reporting on all things related to sports.
Previous Kentucky Perseveres in the NCAA Tournament
Next Santa Fe College Baseball Ranked No. 1 in Nation