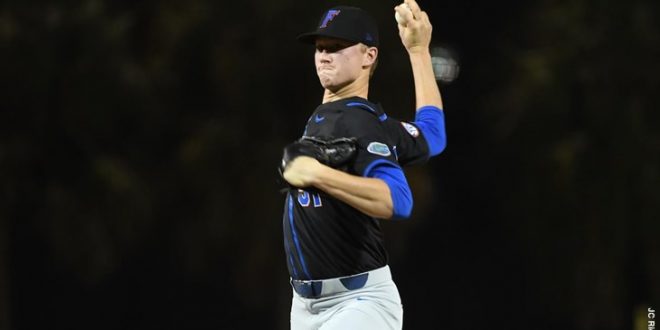 Friday night’s matchup between the Gators and Gamecocks was the first SEC game of the season for each team, and it certainly had no shortage of emotion. From the first inning to the last, it was clear this conference opener meant a lot to the players and coaches on both sides. But Florida was the team able to emerge victorious, defeating the Gamecocks 7-3.

The Gators started out slow offensively, not picking up their first hit and run until the fourth inning. But once they got that out of the way, they proceeded to score runs in all but two of the remaining innings.

Blake Reese kicked off the scoring with a 2-run single up the middle, and the Gators added another run in the fifth inning when Deacon Liput hit an RBI single to right field. Nelson Maldonado tacked on two more runs for the Gators when he doubled down the left field line. The last two Gator runs of the game came on a Jonathan India home run — his seventh of the season, which is a career high.

Head coach Kevin O’Sullivan says the environment in South Carolina is not easy to play in, so he’s very happy with the way his team played offensively.

Continued Consistency on the Mound

Michael Byrne came in as relief and threw the last two innings of the game before earning his fourth save of the season. Byrne currently has a 20.1 inning scoreless streak dating back to the 2017 season.

Brady improves to 5-0, Michael #FeelTheByrne with his 4th save of the year. pic.twitter.com/EyKMhCF2Dc

Florida will take on South Carolina again tomorrow for Game 2 of the series at 4 p.m. Jackson Kowar (3-0, 2.05 ERA) will get the start for the Gators and Cody Morris (3-1, 4.05 ERA) will take the mound for the Gamecocks.

Previous Round of 32 Preview: No. 6 Florida vs. No. 3 Texas Tech
Next No. 2 Florida Loses to No. 10 Georgia in Series Opener