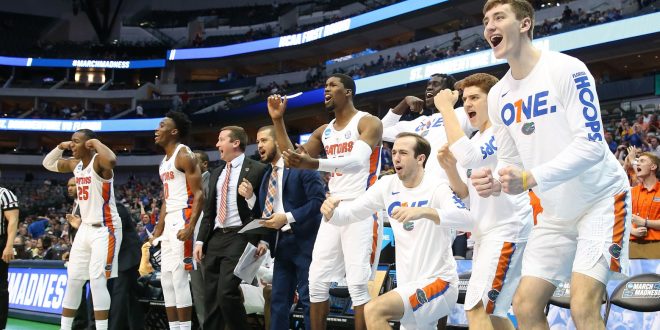 The last time Florida and Texas Tech played was in 1962. #Gators won that game 71-69 in overtime. Bill Koss was a freshman(!!!) that season.

Florida has faced a barrage of talented point guards this season, but Keenan Evans will present one of their hardest tests yet. The senior point guard was named a Second-Team All-American and leads Texas Tech in scoring (17.7 PPG), assists (3.2 APG) and steals (1.2 SPG) . Evans has scored at least 20 points in 13 of the Red Raiders’ 34 games this season and has reached the 30-point mark three times. Evans was a critical cog in TTU’s Round of 64 victory over Stephen F. Austin, posting 23 points, 6 rebounds and 5 assists. Of all the great things Evans did on Thursday night, his most impressive feat may have been his second half performance. Evans went 6-6 from the field, 1-1 from three-point range and 6-6 at the charity stripe. He also scored 19 of his 23 points in the final frame.

It All Starts With Defense

Texas Tech’s stringent defense propelled them to a 25-9 overall record and a No. 3 seed in this year’s big dance. The Red Raiders are 4th in the NCAA in defensive efficiency, 12th in opponent two-point percentage and 14th in opponent effective field goal percentage . TTU is also 55th nationally in opponent three-point percentage and force turnovers on 21.9% of their defensive possessions, which ranks 16th in the country. The Red Raiders have held opposing teams to 60 points or less in 15 of their 34 games this season.

While Texas Tech is a defensive-oriented team, their offense can be lethal as well. Texas Tech ranks 46th in the NCAA in offensive efficiency and have hit 36.3% of their shots from beyond the arc this season. TTU’s ability to crash the boards has contributed in large part to their success as well. The Red Raiders are in the 45th nationally in offensive rebounding percentage and have garnered 81 offensive rebounds over their last 10 games.

Chris Beard said in the team's most recent practice that they worked on defense for 70 of the 90 minutes. #RedRaiders are ranked 4th in the nation in defensive efficiency.

Similar to St. Bonaventure’s philosophy, Florida’s second-round opponent loves to slow down the speed of the game. Texas Tech’s adjusted tempo ranks in the bottom 100 nationally according to KenPom, averaging only 66.6 possessions in a 40 minute game against the average D1 opponent. The Red Raiders’ average offensive possession length is 17.9 seconds, while their average defensive possession length is 17.5 seconds. Texas Tech’s style is to tire you out throughout the course of the game and finish strong in the final 5 minutes. Three of the Red Raiders’ last four games have been decided by four points or less.

Mike White on controlling the tempo of the game:

Mike White, in his 3rd season at UF, is 4-1 in the NCAA Tournament. He is the first coach in the program’s 97-year history to have 4 tourney wins (and counting) in his first three seasons.

As seen in Texas Tech’s game vs. SFA on Thursday night, the Red Raiders will have a decisive fan advantage on Saturday night. The Red Raiders drew about 14,000 more fans than Stephen F. Austin, despite being about two and a half hours further than Dallas.

Chris Beard is no stranger to the NCAA Tournament. In his last season at Arkansas-Little Rock, Beard led the Trojans to a Round of 64 upset over the Purdue Boilermakers. This season, Beard led the Red Raiders to their 16th NCAA Tournament appearance in program history. TTU’s head man spoke graciously of Mike White and the Florida Gators. Below are some of his best quotes, including a fantastic tale of his Whataburger adventures.

Chris Beard on Whataburger and its similarities to America: