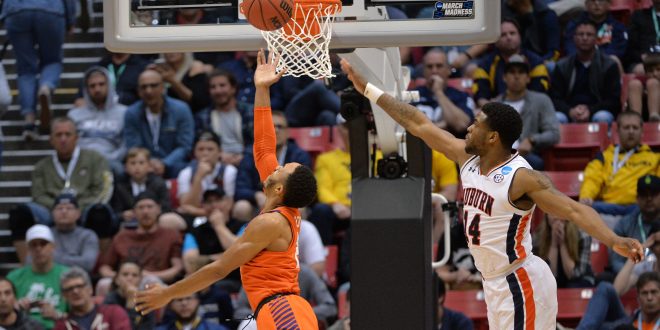 Mar 18, 2018; San Diego, CA, USA; Clemson Tigers guard Marcquise Reed (2) moves in to score a basket ahead of Auburn Tigers guard Malik Dunbar (14) during the second half of the second round of the 2018 NCAA Tournament at Viejas Arena. Mandatory Credit: Jake Roth-USA TODAY Sports

The Auburn Tigers season came to a disappointing end Sunday in San Diego.

They were blown out by Clemson 84-53 in the second round of the Midwest region, falling a game short of what would’ve been the school’s fifth-ever Sweet Sixteen appearance.

CLEMSON OWNS THE BATTLE OF THE TIGERS!

(5) Clemson obliterates (4) Auburn 84-53 and advances to the #Sweet16. #MarchMadness pic.twitter.com/C6xEAScPE1

Auburn put up its worst shooting performance of the season, going just 25.8% from the field. Even worse, they shot just over 21% from beyond the arc (7-32). Dynamic scorer Mustapha Heron was limited to just 12 points of 3-for-10 shooting.

For Clemson head coach Brad Brownell, the performance was just the latest example from a team he thought was special from the beginning.

“We talked about it at the beginning of the year, I thought this team could be really good,” Brownell. “The way we played here in San Diego was at an extremely high level.”

Next up for Clemson, they’ll take on Kansas on Friday night in the Sweet Sixteen.