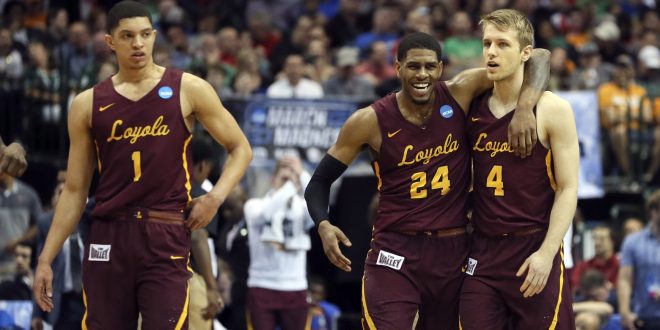 The 11-seeded Loyola Ramblers men’s basketball team will play in the Sweet 16 for the first time since 1985. They will face a No. 7 Nevada in the bracket-busting matchup.

Coming into the tournament, the Loyola-Chicago Ramblers were picked by many to be a dark horse in the NCAA Tournament. The team had an impressive regular season beating top teams like then-No. 5 Florida on its way to a 28-5 record.

The Ramblers matched their school record for wins after beating sixth-seed Miami in the first round of the NCAA Tournament. The win total was their best since the 1963 season when they won the national championship.

Then, they advanced to face third-seeded Tennessee in the second round.

Against Tennessee, the game came down to the final seconds and a lucky roll. Redshirt junior point guard Clayton Custer got that friendly bounce with 3.6 seconds left. The shot would be the difference for Loyola as they Tennessee 63-62 in a South Region second-round game. While some predicted the team to do well, no one predicted they would make it this far.

Now, the team enters the game against another underdog in No. 7 Nevada. The Ramblers have needed second-half comebacks in both of their wins, Nevada has a lot of experience battling from behind.

Senior Guard Ben Richardson knows this will be another tough task.

The matchup between the Nevada Wolf Pack and the Loyola-Chicago Ramblers is symbolic of how crazy this March tournament has been. Two teams who were not expected to make it past the first round now compete for a chance to go to the Elite Eight. Nevada has earned its spot.

Nevada has trailed at halftime in five straight games, by an average of 12.2 points, yet the Wolf Pack are in the Sweet 16 for the second time in school history. The team refuses to go away.

The junior twin brothers Cody Martin and Caleb Martin are expected to be a major factor in the upcoming matchup.

Caleb, the team’s leading scorer, hit clutch 3-pointers in the opening round against Texas in overtime. In the next round, his brother Cody scored 25 points to help the Wolf Pack overcome a 22-point deficit to beat Cincinnati. The duo will need to continue their hot stretch if they hope to top a feisty Rambler defense.