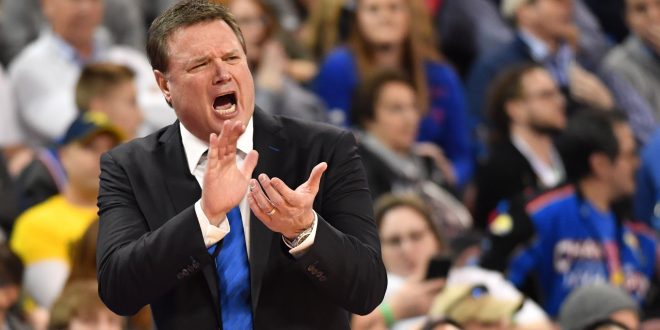 Mar 17, 2018; Wichita, KS, USA; Kansas Jayhawks head coach Bill Self reacts against the Seton Hall Pirates in the first half in the second round of the 2018 NCAA Tournament at INTRUST Bank Arena. Mandatory Credit: Peter G. Aiken-USA TODAY Sports

Of the four teams remaining in the Midwest region of the NCAA Tournament (Duke, Syracuse, Clemson and Kansas), Brad Brownell is perhaps the least recognizable head coach for any of the four teams.

It’s not so bad when the other three coaches are Jim Boeheim, Bill Self, and Coach K.

But Clemson’s 8th-year head coach is quickly making a name for himself and enjoying his first run into the Sweet 16 with the Tigers. Brownell and his squad will get their chance to punch their ticket to the Elite Eight tonight at 7 p.m.

After leading Clemson to a 25-9 season, Brownell and his squad wasted no time asserting themselves in this year’s March dance. After taking care of New Mexico State in the first round, they thrashed Auburn, 84-53, to advance to the Midwest Region semifinal.

On that night, the Tigers had four players in double figures, and they were led by a double-double from junior forward Elijah Thomas.

As for Kansas, Bill Self noted many similarities between his team and Brownell’s. When asked to compare the Tigers to any other squad, Self chose to compare them to his own instead.

Referring to Marcquise Reed, Gabe DeVoe, and Shelton Mitchell, it’s easy to see the similarities between the two squads.

With the game being played in Nebraska, only a few hours away from Kansas, Self isn’t too concerned with the impact the quick turnaround will have on his team’s performance.

The winner of the Kansas-Clemson game will face Duke or Syracuse on Sunday for a spot in the Final Four. That will tip-off tonight at 9:37 p.m. ET.

Sports media and management student at the University of Florida. Content creator for ESPN 98.1 FM/ 850 AM WRUF.
@TheEdgarChavero
Previous Preview: No. 2 Florida Baseball Welcomes No. 4 Arkansas for SEC Showdown
Next Florida State Advance to the Elite 8