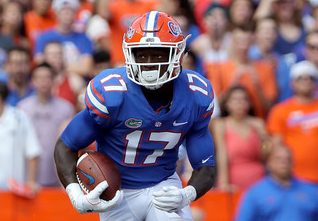 Kadarius Toney had a breakout season in his first year as a slot receiver for the Gator football team in 2017. Florida fans were extremely satisfied with his surprising performance. Now, the announcement that will transition Toney from slot to wide receiver will have fans extremely anxious for the season to start.

Although, before the huge announcement there were a lot of assumptions about Toney switching to becoming a quarterback. He’s had experience at that position. Toney was a former high school quarterback in his hometown of Mobile, Alabama.

He threw for almost 3,000 yards and 32 touchdowns and ran for 894 yards and 15 touchdowns. He also had an opportunity to show off his throwing skills last season with a highlight play when he threw a 50-yard bomb to Tyrie Cleveland.

The other major thing for Toney for the upcoming season is to stay healthy. His tenure of a high-playing ability came to a stop when he unfortunately experienced a separated shoulder against Kentucky. He would be on and off throughout the rest of the season after that injury. He claimed that sometimes he would have to ward off opponents with only one arm.

Here is Toney on a quick screen play against Kentucky last season, showing his potential for the 2018 season:

In his first season, Toney was best known for his nifty shake-and-bake jukes and running the wildcat formation with versatile skill. Now, the incoming sophomore has head coach Dan Mullen claiming that if Toney wants to play the next level, he’ll have to move to the wide receiver position.

It turns out that the new wide receiver is glad with his new role on the team.

“It wasn’t that hard, I felt basically like I wanted to use my ability to my strength because I know I can do … I’m versatile is basically what I’m trying to say,” said Toney in his first interview with the local media this season. “I wanted to play [quarterback], but I got to do what’s best for the team,” according to seccountry.com

Content is another way of how Toney feels about the tactics he’s learning with his new position.

Toney is extremely excited with the new offense. He admits the transition was more of a learning process than he expected. He participated alongside the quarterbacks during last spring’s practices.

Although, Toney envisioned himself as becoming a quarterback at some point in his collegiate career.

KEDARIUS TONEY IS GONE!!! 36 yard run for the true freshman and the #Gators have tied the game at 7. pic.twitter.com/le5FdCpgJI

Recent grad from the University of Florida. Editing all articles on here while helping out the newbies. Love all things basketball.
@@MarcoJMartinez_
Previous Depth to Gator Football Roster
Next Gator Running Backs Learning New System