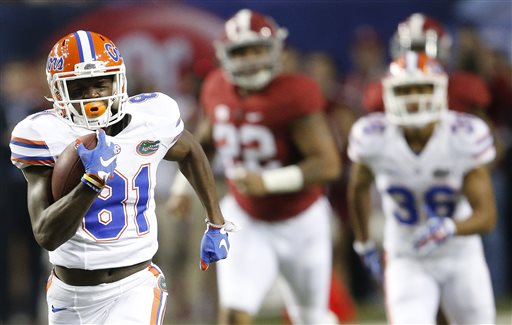 FILE - In this Dec. 5, 2015, file photo, Florida wide receiver Antonio Callaway (81) returns a punt for a touchdown during the first half of the Southeastern Conference championship NCAA college football game against Alabam in Atlanta. A Florida athletics booster serving as a hearing officer for the university has cleared standout receiver Antonio Callaway of sexual assault on Friday, Aug. 12, 2016. The accuser, her attorney and witnesses boycotted the hearing, saying Jake Schickel was biased because of his financial contributions to the Gators. The accuser has 10 business days to appeal the ruling. (AP Photo/John Bazemore File)

The season hasn’t officially started yet, but the Gators are working hard to prepare for the new season. After coming off of a 4 and 7 record last season, all the Gators can do is move forward. Although the spotlight might be on the new recruits, it’s important to keep in mind the return of suspended players in time for the upcoming season as well. With all these players, the coaches are looking to create depth on the roster. According to ESPN, four team members were cleared to rejoin the team back in January. With the return of those players and the new ones coming in, the Gator coaching staff have an abundance of new players to work with.

In January, head coach Dan Mullen announced the addition of Christian Robinson to the Gator coaching staff. Robinson is focused on helping the Gators improve with the help from his experience at Mississippi State, Ole Miss and Georgia. One thing that Robinson is working on is gaining linebacker depth. Among other elements, Robinson thinks Vosean Joseph is a good fit for a linebacker due to his skill set.

To be a linebacker for the Florida Gators, Robinson is looking for someone that is aggressive on the field. The key for Robinson is to focus on getting his players comfortable with concepts and techniques. It’s still early in the season. Robinson is hoping that Joseph will continue to improve in time for the start of the season.

Don’t miss the Gators in action on April 14th for the Orange and Blue game in the swamp.