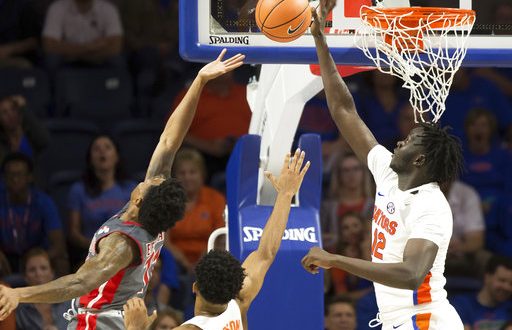 Florida sophomore Center Gorjok Gak underwent Arthroscopic surgery this Wednesday to repair a right knee issue that stuck with him all season.

The surgery will include a small incision into the joint but will leave the 6 foot 11 rising junior recovering for four to six months. Due to the knee injury throughout the season, Gak was limited to 8.9 minutes per game in 29 games in the 2017-2018 season. Within those games, Gak averaged 2.2 points and 2.4 rebounds.

Gak was excited to play as a Gator at the beginning of the season, but this knee injury limited his game minutes.  Gak is still as confident as the day he committed back in April 2016.

Head Coach Mike White says Gak will play a bigger role next season. Starting center John Egbunu will enter the upcoming 2018 NBA Draft and the weight will be put on Gak’s shoulders.

Previous Stanton, Judge, and Sanchez go yard as the Yankees fly past the Rays
Next Houston Texans Excited for the Future