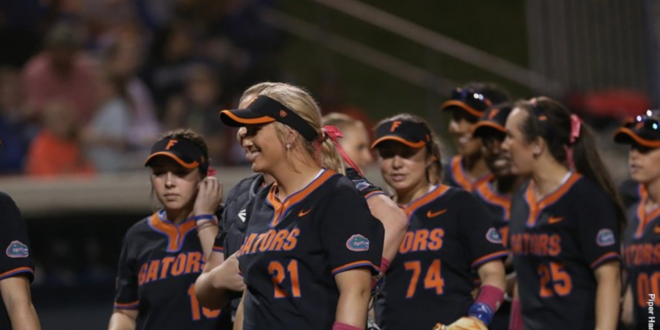 SEC Preview: No. 4 Gator Softball Travels to No.15 Alabama

The Tide holds the lead in the all-time series with a 36-33 record against Florida. Florida and Alabama last met during the 2017 Super Regional round of the NCAA Tournament in Gainesville. The Gators won two of three games (0-3, 2-0 and 2-1) earning a spot in the Women’s College World Series.

Head Coach Patrick Murphy said Florida will not beat itself.

In Sunday’s game, Senior Alexis Osario (8-3) struck out nine to earn her second complete-game win of the weekend in the circle. Osario will celebrate her senior day in game one against the Gators.

Big bats and a stellar return to the circle from Alexis Osorio gives Alabama the 9-0 win over Kentucky in game one of today’s doubleheader!#RollTide pic.twitter.com/98uW8NGIYY

The Gators will try to bounce back from Wednesday’s 1-0 loss at the University of Central Florida softball stadium. Despite the loss, Florida currently leads the nation in shutouts with 23 through 37 games played.

Senior Kayli Kvistad was named a Top 10 finalist for the prestigious Senior CLASS Award. The left-handed batter is just three walks away from being second overall in Florida history in career walks. Kvistad is currently ranked third with 157 career walks. She plans to pass Aja Paculba’s 160 career walks.

Gator Nation, let's do our part to help @kaylikvistad21‼️

On the opposite side of the plate, Aleshia Ocasio leads the nation in walks allowed per seven innings (0.44) and strikeout-to-walk ratio (18.60). The senior issued zero walks in the midweek matchup. In six innings, Ocasio allowed five hits and struck out another five.

Kate Venezio is a fourth-year telecommunication-news student at the University of Florida. Kate does it all: Behind the camera she captures emotional moments as a photographer for the University of Florida Athletic Association. She's comfortable being in front of the camera, too. Kate interviews players, coaches, fans and family members for pre- and post-game coverage as a beat reporter for ESPN Gainesville/WRUF-FM. In addition, Kate produces the sports segment for the weekly WUFT News program. There, she's responsible for writing the script in its entirety to include production commands. The presentation includes video highlights and interviews taped and edited, and Kate then live anchors the final package on a daily deadline. In addition, she writes stories for wruf.com where she informs sports fans of local, state, and national trending topics. Kate also utilizes social media as a tool to help get the stories in front of viewers.
@@kate_venezio
Previous Bubba’s plan to sneak into another jacket
Next The 2018 Masters Begin