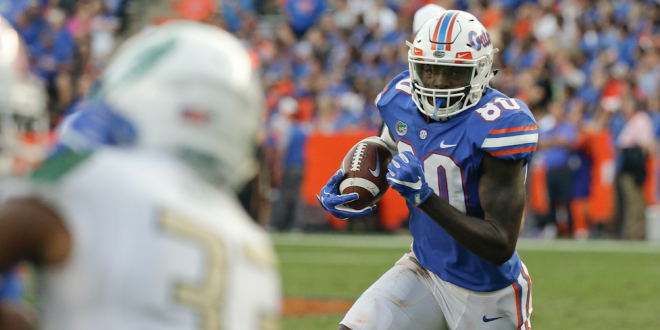 Over the past couple of years, the tight end position has taken a backseat in Florida football’s offense. In fact, the last time they played a crucial role was in the championship years. Now with Dan Mullen back, the tight ends are embracing the opportunity to become an essential component of the Gators’ offense.

Goolsby, a senior last season, has declared for the NFL Draft. Goolsby was responsible for one of the tight end unit’s two touchdowns last season. In his career as a Gator, he scored five touchdowns and totaled 619 yards on 55 receptions. The little success of the tight end squad has come through him the past couple of years, and the Gators will look to replace him.

Redshirt sophomore Kalif Jackson announced after the loss to Florida State that he would not be returning next season. He announced his plan to transfer after his graduation in December. Jackson only ever played two games for the Gators, and they both came in the 2016 season.

Returning for the 2018 season are redshirt seniors C’yontai Lewis and Moral Stephens, and redshirt freshman Kemore Gamble. Tight end’s coach Larry Scott has been preaching consistency to this tight end unit and their new role. In the spring game, he expects them to “play fast, go out and have fun [but also] play with some really good technique and establish a certain level of consistency.”

Consistency is key, and Scott has said that’s something C’yontai Lewis is doing to improve his game. In one word, Scott describes Lewis as “eager.”

“He’s hungry right now,” Scott said, “he’s starting to have an understanding of the bigger picture.” Lewis started all 11 games as tight end for the Gators last season, scoring one touchdown off of 7 receptions and 42 yards. But Lewis has noted his improvement during this spring.

Moral Stephens has also made improvements this spring. Coach Scott noted during a scrimmage between Stephens and Lewis that they are working on the little things. Last season, Stephen totaled 141 yards off of 6 receptions and his looking to improve his numbers.

On Kemore Gamble, Coach Scott has admitted that he’s still “a little bit inconsistent.” He’s a young tight end who’s really starting to learn the game, but Scott sees a lot of potential in him. Gamble learned a lot from his redshirt season and is now learning all the nuances of being a complete tight end. Scott says he can be a “total package [tight end] and not just a flex guy.”

Recently, high school junior and 4-star recruit Keon Zipperer paid a visit to UF over his spring break. He also visited Georgia, Florida State, and Clemson, but as a Florida native, he feels at home with UF. Coach Scott has kept a good relationship with Zipperer throughout the years and hopes to bring the No. 3 overall tight end recruit to Florida.

With their new role in the Gators offense, the tight ends have found a new wave of confidence.

Coach Scott recognizes that after the quarterback they are the players on the field with the most involvement. His guys are embracing their role and the great sense of responsibility and accountability that comes with it.

Scott and the tight end unit are excited with their improvement this spring and we’ll get to see the first look at it at the Orange and Blue game next Saturday, April 14th at 3:00 pm in the Swamp.