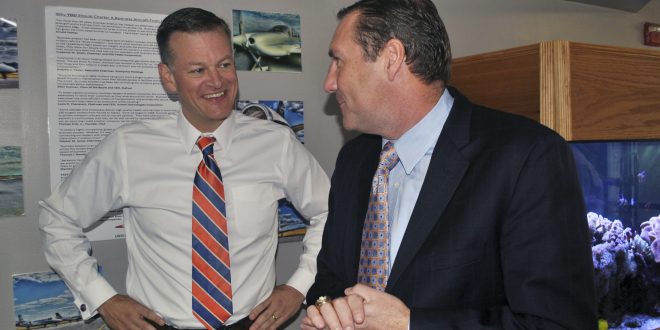 When the Florida Gators hired Dan Mullen in December, it signaled the start of a rebuilding project. It was one that the program had badly needed for a few seasons. It hasn’t taken Mullen more than a few weeks to implement changes on both sides of the football.

The Gators have always been known as a solid defensive program. However, they dropped from fifth-overall in total defense in 2016 to 31st-overall in 2017 under former coach Jim McElwain.

Under Mullen and new defensive coordinator, Todd Grantham, the Gators will now switch from a 4-3 defensive front to a 3-4. Returning players, along with new players, are now being forced to learn a new scheme, new terminology and for some players a new position.

But defensive line coach Sal Sunseri said that he’s confident his group of players will benefit from the change in system and their hard work in the spring.

“Of course there’s always a learning curve when you’re coming in here with Coach Grantham’s system — who has had success everywhere he’s been. Now, what they’re doing is they’re learning different spots and different calls and different alignments,” Sunseri said.

Senior DE Cece Jefferson is learning how to play as a hybrid edge rusher rather than having his hand on the ground. Sophomore Jachai Polite and redshirt sophomore Jabari Zuniga will also provide depth at the defensive end position.

Redshirt senior Khairi Clark and sophomore Elijah Conliffe are both also pushing for reps. The Gators boast an impressive amount of depth on the defensive front.  It’s one of the reasons why Mullen is convinced a 3-4 scheme would work at the Swamp.

Early on, Mullen said he is looking forward to having the Gators play “good football.”

He said the Gators were guilty of being far too inconsistent last year on both sides of the ball.

As one of Mullen’s first orders of business, he has placed a lot of emphasis on the defensive trenches. It will something that the Gators will need to improve in if they hope to climb back atop the SEC.