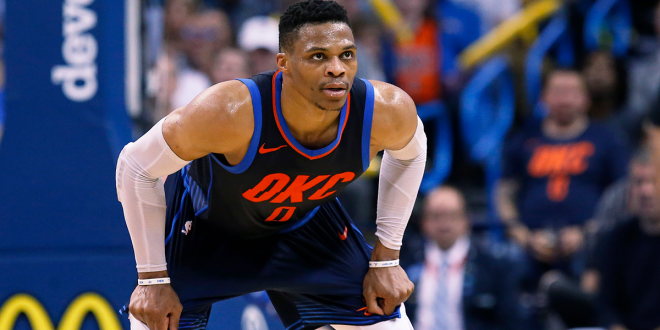 Once thought to be a feat that wouldn’t be accomplished again in the NBA, Russell Westbrook finished the regular season averaging a triple-double. Again.

The Oklahoma City Thunder star guard and reigning NBA Most Valuable Player entered last night’s regular-season finale against Memphis with a few things on his mind. A win was the difference between the West’s fourth overall seed and its eighth. Drawing the eight-seed would mean an unfavorable matchup with top-seeded Houston in the first round. But on a more personal note, only 16 rebounds separated Westbrook from another triple-double season.

Westbrook was all over the floor in the Thunder’s huge 137-123 win, helping secure home-court advantage for a first-round tilt against the Utah Jazz. The MVP controlled the game, adding a whopping 19 assists to go with six points. Oklahoma City grabbed a comfortable 20-point lead by halftime and never let up.

The Thunder needed every last bit of it, as the crowded West was wild until the last day. Only three games separated the third-place Trail Blazers from the ninth-place Nuggets. Five teams finished within one game of one another, and seeding scenarios entering the evening were all over the place.

Westbrook didn’t want the eighth seed. He propelled Oklahoma City to three straight victories to end the season and earn home-court advantage over a pesky Utah team that features Rookie of the Year hopeful Donovan Mitchell and elite center Rudy Gobert. The Thunder will certainly be glad to open at home, as they finished 27-14 in Oklahoma City during the regular season.

But as the smoke clears from Wednesday’s wild season finale, Westbrook is left standing with another incredible statistical feat.

A League of His Own

Last year, Westbrook went on a season-long tear following the icy departure of former MVP Kevin Durant for Golden State. He became the first player since Oscar Robertson in 1962 to average a triple-double, posting a ridiculous 31.6 points, 10.7 rebounds, and 10.4 assists per game.

This season’s stat line was a bit less flashy, as the additions of Paul George and Carmelo Anthony naturally took the ball out of Westbrook’s hands. Still, Westbrook posted 25.4 points, 10.1 rebounds, and a league-leading 10.3 assists per game. Only he and Robertson accomplished such sustained overall dominance in the history of the league.

Social media caught fire with Westbrook’s showing last night, as he secured another record-breaking season in one of the Thunder’s biggest wins of the year. So why does it still feel as though his accomplishments aren’t being celebrated enough?

Simply put, Westbrook’s abilities are being taken for granted – and as “old news,” he was overshadowed this season.

Through it all, it might be argued that Westbrook’s season was the most notable in the NBA this season. As a one-man show last year, he was all over the media while smashing records. To add the likes of George and Anthony and still accomplish a triple-double average in today’s league is remarkable.

Now, Westbrook hopes to prove that he and the Thunder are just getting started. After all, he has proven his doubters wrong thus far.