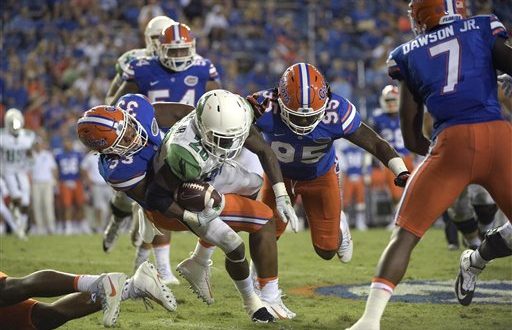 After a season with suspensions and injuries on a limited linebacker position, the Orange and Blue Game is an early look for how this expanded spot will look for the 2018 season.

David Reese: The junior is an easy player to project for the Gators’ new defense. Last season, Reese led the Florida roster with 102 tackles surpassing all of his teammates, had 1.5 sacks and an interception.

Vosean Joseph: When this junior hits, he hits hard. Joseph hasn’t been playing his best game this Spring but finished the 2017 season with 55 tackles and an interception.

Kylan Johnson: The redshirt junior is coming off a season of multiple back-to-back injuries, missing most of the season. This spring has been a quiet one for Johnson so there’s no telling what’s to expect from him.

Ventrell Miller: After missing a whole season due to suspension, Miller has been effective on the field during spring ball. Head coach Dan Mullen says Miller’s performance in their scrimmage is a little off, but he’s trying to play catch-up.

James Houston: Alongside Miller, Houston sat out last season, but is excited about his ability to help the linebacker position on this Florida team. A player that’s able to play both inside and outside can be useful for the upcoming season.

Rayshad Jackson: While playing mostly on special teams for the 2017 season, Jackson is one player that has been one of the most improved during spring. Jackson finished with 14 tackles during the season.

Lacedrick Brunson: This redshirt freshman came out of the Gators last scrimmage with a shoulder injury. Brunson’s another player that can be either inside or outside, only his spring performance will tell.

Cece Jefferson: The face of Florida football this season Cece Jefferson is showing his versatility as a defensive end under the previous coaching staff and now an outside linebacker for defensive coordinator Todd Grantham. Jefferson totaled 47 tackles with 4.5 sacks last season.

Jeremiah Moon: The redshirt sophomore started in five of the 10 games played last year. Moon is another versatile player that could potentially play at defensive end.  He finished the season with 23 tackles, one tackle-for-loss, and 0.5 sack.

Jachai Polite: Polite is a junior who is also being considered for the outside linebacker position from defensive lineman. Prior to Polite’s season-ending injury, he totaled 22 tackles, 5.5 tackles-for-loss, two sacks, six quarterback hurries, and one forced fumble.

Nick Smith: The redshirt freshman suffered a season-ending knee injury during the preseason and spent his freshman year on the bench, but could be a weapon for this position.

Amari Burney: The four-star high-rated defensive signee Amari Burney is another versatile Gator who has a potential of either playing at safety or as an outside linebacker.

As coming from the position of most concern, the 2018 Spring Game looks pretty promising for the Gator’s linebackers this upcoming season. The return of injured players, the addition of fresh meat, and the versatility of positions can help bring this program back the respect it deserves.

Previous Women’s Lacrosse: The Fight for First Place in the Big East
Next Orange and Blue Scrimmage: Defensive Line Preview