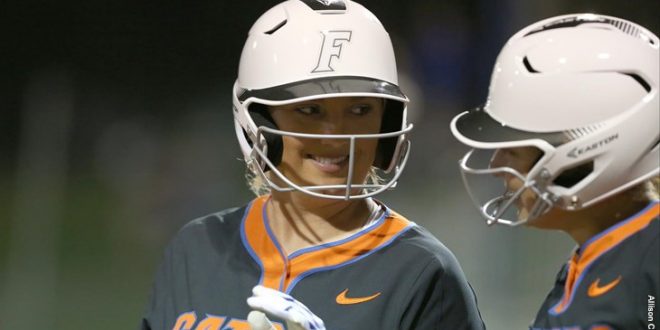 No. 6 Gator Softball Set to Host No. 11 Gamecocks in Weekend Series

The sixth-ranked Florida Gators Softball team will play the eleventh-ranked South Carolina Gamecocks in a three-game series this coming weekend. The Gators come into this weekend off a loss to in-state rival Florida State in the mid-week Sunshine Showdown. The race for the SEC regular-season championship remains close as Florida leads, but right behind them is Georgia in second and the Gamecocks in third.

The Gators and Gamecocks have played each other more than 60 times over the years. In the last ten meetings, Florida has won all but one of them, and that was in 2013. The Gators have won the last seven games in a row, and run-ruled the Gamecocks six out of those seven times.

The Gators overall record in the 2018 season is 34-7 and they are 9-3 in the SEC conference. In UF’s last game, they lost on the road to FSU, 4-1. Florida struggled offensively in their game against the Seminoles, only getting off two hits. Florida State’s Carsyn Gordan hit a solo home run in the bottom of the first to give FSU the early lead.

But that didn’t stop the Gators because, in the bottom of the third inning, they made a small stride towards a comeback.

Sophomore Jordan Roberts started the inning off with a walk. After Junior Alex Voss came into pinch run, Senior Aleshia Ocasio put down a successful sacrifice bunt to move Voss to second. Next up, Senior Kayli Kvistad hit a double to right field scoring Voss from second. That made the score 1-1.

Here are some more notes about the Gators going into this weekend:

The Gamecocks come into this weekend off a mid-week win against Winthrop University. South Carolina put up seven runs against the Eagles.

Gamecock pitchers recorded eight strikeouts in that meeting. South Carolina’s overall record this season is 34-7, like the Gators, and 8-4 in SEC play.

You can watch the Gators-Gamecocks match-up on SEC Network + this whole weekend.

North Carolina Native with a passion for sports. Follow me on twitter @lcavasinni11
Previous Lightning Dominate Devils in Game 1
Next UF to Host Tom Jones Memorial Track and Field Event