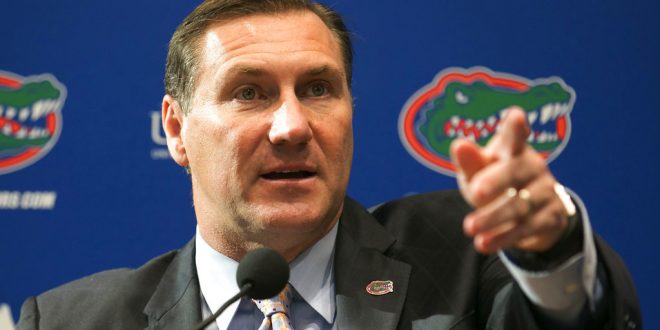 FILE - In this Monday, Nov. 27, 2017, file photo, Dan Mullen speaks during an NCAA college football news conference after being introduced as the new head football coach at Florida, in Gainesville, Fla. At least one rankings list has Mullen as one of the coaches most likely to succeed in 2018. (Alan Youngblood/Star-Banner via AP, File)

New Gators head football coach Dan Mullen has been on a mission since the moment he stepped out of the plane giving an enthusiastic Gator chomp.

His mission has been to return Florida Gators football to the national spotlight and revitalize a disgruntled fan base. Mullen has constantly preached “The Gator Standard” for the program.

For Mullen, getting the program to this standard starts with welcoming fans to the program with open arms. Mullen has been spotted visiting sorority and fraternity houses, dancing with students at Dance Marathon and showing his dodgeball skills at the Southwest Recreation Center on campus.

The goal for Mullen has been to “Pack the Swamp” for the spring game to get the 2018 season off on the right foot. The excitement around the program is electric at the moment, but many of the fans still have specific areas where they want to see improvement in when the team returns to The Swamp Saturday.

Mullen’s resume with developing signal callers is staggering. He coached a Heisman winner in Tim Tebow, developed a Pro Bowler in Dak Prescott and made Nick Fitzgerald into one of the top quarterbacks in the SEC. Mullen was brought to Gainesville to develop the next great Florida quarterback.

Through spring practice, the quarterback play has been up and down. Franks didn’t make the best first impression for his new coaches, throwing multiple interceptions in the first live-action scrimmage of the spring. In last Saturday’s scrimmage, Franks turned in a more respectable performance by throwing for four touchdowns.

Even though Franks appears to be the favorite heading into Saturday’s spring game, his lead in the race isn’t large. Trask has shown his capabilities this spring and has garnered praise from Mullen. The coaches have been very patient with the development of Emory Jones, who has great potential. Mullen said in his press conference Monday they are forcing him to stay in the pocket and not run as much. He also said Jones has shown signs of patience and wants the early enrollee to build confidence. Mullen said he wants to see better decision making from his signal callers to lead to an increase in completion percentage.

He compared the mindset he wants to see out of the quarterbacks to driving a sports car.

Offense isn’t the only group with questions. The defense has been adapting to the new 3-4 scheme implemented by new defensive coordinator Todd Grantham. This scheme change has led to defensive contributors such as CeCe Jefferson and Antonneous Clayton moving to the outside of the line. Going position by position on the defensive side, one thing that lacks at the moment is depth. Depth is something Mullen and his defensive coaches have been trying to build upon this spring.

Mullen wants to go deep into the depth chart on the defensive side. He believes this will help the team stay fresh during the season, especially with the team’s past history of injuries. This will also give more players time on the field to contribute and gain valuable game reps. The opportunities are out there for this young defense due to the departure of several key defenders, such as Taven Bryan and Duke Dawson.

Mullen explained the importance of building depth on the defensive side.

Everyone has their own position group that they will have their eyes on Saturday when they either enter Ben Hill Griffin Stadium or watch the game from home. For Mullen, his focus is on the team’s overall effort. Mullen said the effort and attitude of the team has improved significantly since spring practice started. He wants his players to spend more attention and energy on the next play rather than what happened on the play before.

Mullen defined a successful spring practice for his team would be for the players understanding how hard they can possibly go.

Mullen said he also wants to see both sides of the ball to handle game situations better.

The Gator faithfuls will get their first look at the 2018 Gator football team Saturday afternoon. The team held a draft Friday to split the team into two instead of matching the first team against the second team. The Orange and Blue Debut kicks-off at 3 p.m. Coverage of the game starts at 2:45 p.m. on ESPN WRUF.