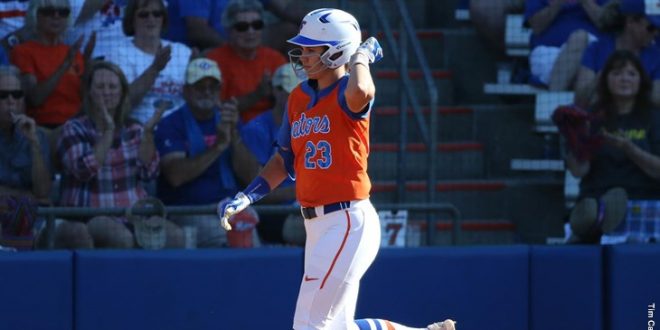 The Gator softball team improved its record to 37-7 and 12-3 in the SEC after sweeping a doubleheader on Saturday in Gainesville against the South Carolina Gamecocks to complete a series sweep — their third SEC series sweep of the season.

Aleshia Ocasio delivered a strong performance in the circle for the Gators, allowing just two hits while collecting 10 strikeouts.

“I had the mentality that I was going to go in there and give it my all because lately, I haven’t been doing that well. So I was just trying to work location, trying not to give them any free passes. I was just really working on hitting my spots and making my pitches move,” said Ocasio.

Florida jumped out to a 2-0 lead in the bottom of the second inning when Jordan Roberts singled to left center. She drove in Janell Wheaton who had singled through the left side and Jordan Matthews, who drew a walk.

The Gators extended their lead in the third inning after piecing together four hits and pushing three runs across the plate. Hannah Adams and Amanda Lorenz hit back-to-back singles to lead off the inning and Nicole DeWitt followed with an RBI single up the middle. With runners on second and third, Kayli Kvistad hit a sacrifice fly to bring home Lorenz. Ocasio brought in the Gators’ fifth run on a sacrifice bunt that scored DeWitt.

Florida tacked on two more runs in the fourth inning to make it 7-0.

Barnhill pitched a complete game and had eight strikeouts while giving up just one hit and one walk.

“It’s hard to one-hit somebody after you face them the other night, and then she did it again today. So I was really proud of her being able to locate her pitches a lot better today,” said Gators coach Tim Walton.

Meanwhile, Oh held the Gators to no runs and just three hits through six innings. But Florida finally broke through in the seventh inning when Adams sent a one-out single up the middle. Lorenz, who has reached base in every game this season, followed with a walk, moving the winning run into scoring position. DeWitt came up next and blasted a walk-off three-run home run over the center field wall.

“It was pretty exciting. I wasn’t trying to do too much with it obviously. I was just trying to keep it simple and thankfully the ball went out. I had a good feeling about it,” said DeWitt.

The Gators will host Florida A&M in a midweek matchup on Wednesday at 6 p.m. The game will be broadcast on SEC Network +.