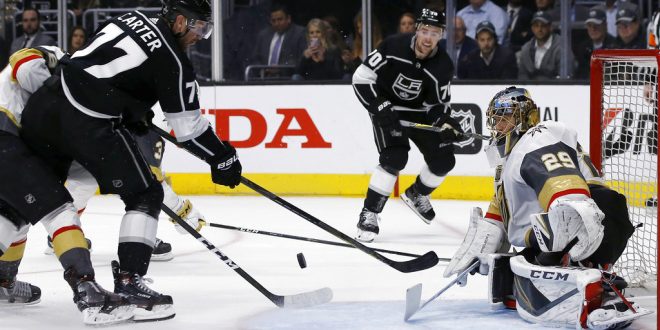 A Golden Night for the Golden Knights

A Victory for Sin City

The Las Vegas Golden Knights are in their first season ever. They’ve already made history as the third modern-era expansion team in the NHL, NBA, and MLB to win its division in their inaugural season after they took the Pacific Division title this year. Now, the Knights are the first franchise in the history of the NHL to sweep a postseason series. On Tuesday night, the Knights defeated the Los Angeles Kings 1-0 in Los Angeles.

The @GoldenKnights #ThirstForTheCup is still going as they continue to add to the history books. #StanleyCup pic.twitter.com/05pJpwP3gs

and none for Gretchen Weiners bye pic.twitter.com/hPtXpcmufU

Knights goalie Marc-Andre Fleury was a key player and is one to thank for their win. In Tuesday’s game, he had 31 saves. Within this entire series, he only allowed three goals. His save percentage this year is at a whopping .977 rate, which means he saved 127 out of 130 goals. Fleury is no stranger to the playoffs. In the expansion draft, he was brought to Vegas as a three-time Stanley Cup champion with the Pittsburgh Penguins. Fleury also passed Dominik Hasek for 11th in NHL history amongst goaltenders. His game on Tuesday was his 12 career shutout.

“It was a tight series, low scoring on both sides, it was a quick and awesome series, both teams were defensive and taking care of business,” Fleury said.

A Sting for the Kings

Los Angeles actually outshot Vegas 31-to-21 in the game; however, the offense just wasn’t there. The Kings were even 1-for-13 on power play throughout the series.

“I thought tonight was our best game. We created the most quality chances, we just didn’t finish offensively. Tonight we had good looks with the right people, but Fleury is really good and they chuck really well,” John Stevens, head coach of the Los Angeles Kings said.

“We created opportunity, but at the end of the day, you have to take advantage of those opportunities. You need to put the puck in the net to move on this time of year and we obviously didn’t do that enough.”

Kings goalie Jonathan Quick made 20 saves for his team, and only allowed seven goals in the series. However, his offense only scored three goals during that time.

To rub salt in the wound for the Kings, the only goal made that night was by Brayden McNabb. An assist from Reilly Smith to McNabb with 4:04 left in the second period gave Vegas their lone goal of the game.

McNabb came from the Kings last June in the expansion draft to join the Golden Knights. Over the summer of 2017, the Kings offered Dustin Brown, Marian Gaborik, and McNabb to the NHL Expansion draft. Vegas selected McNabb over the other more experienced offensive guys.

Next Fight for the Golden Knights

The Knights have plenty of time to rest up before the second round.  A team hasn’t come back from a 0-3 deficit since 2014, the last team to do that was the Kings against the San Jose Sharks.  The Sharks currently lead the Anaheim Ducks 3-0. They hope not to see a repeat of 2014. If the Sharks win their series, they will take on the Las Vegas Knights for the second round of the Stanley Cup Playoffs.