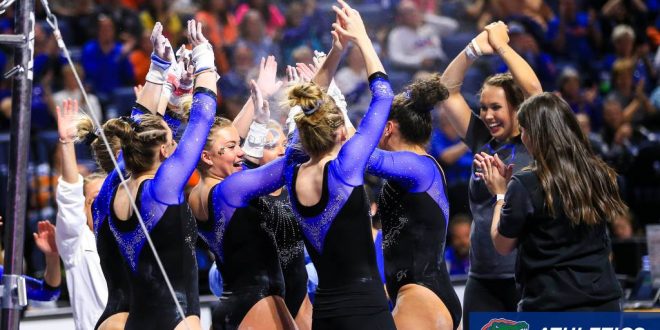 The Florida Gator Gymnastics team ended the 2018 season with a third-place finish at the NCAA Super Six Finals Saturday night.

The Gators opened the meet on vault. Senior Rachel Slocum put on a strong performance earning a score of 9.9125. Junior Alicia Boren led the Gators with a score of 9.9375. The team totaled a 49.4125.

For the third rotation, the Gators were on beam. Again, Florida’s youth took center stage. Freshman Alyssa Baumann scored a 9.9375, placing her fourth overall at the meet.

For their final rotation, Florida moved to floor. Baumann again led the Gators with a score of 9.95.

Here were the final overall scores from the evening:

Born and raised at the ballpark! Typically quiet- until it comes to sports. I'm a South Florida native with a passion for baseball nearly as strong as my faith. Grew up in garnet + gold, turned out sporting orange + blue. Likely to be found with a camera. And yes, I take food pictures.
@victoriarossman
Previous Gator Baseball Drops Series Finale Against Kentucky
Next Cavs Edge Pacers 104-100 To Tie Series