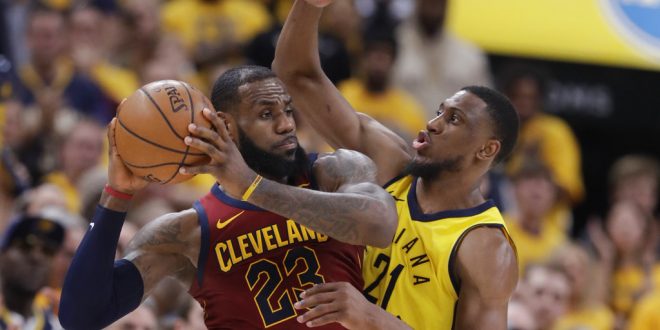 King James and the Cavs avoided a 3-1 series deficit Sunday, taking down the Indiana Pacers in Game 4.

After dropping Game 3 to the Pacers, the Cleveland Cavaliers looked to even the series at 2. They did just that with a 104-100 road victory and avoided a late-game collapse after building a sizeable lead during the game.

Cleveland and Indiana now face a best-of-three situation to duel it out and advance to the next round.

Before the game started, the Cavs entered the arena wearing matching suits. People took notice of the trend and posted videos of them walking in wearing similar outfits. Several Cavs players wore the same clothes before Game 3 as well.

The Cavs are doubling down on the matching suits pic.twitter.com/YnPDA7qOoi

Though Cleveland dropped Game 3 after doing the same thing, the Cavs looked to try their luck again.

Following the Cavs’ two-point loss to the Pacers on Friday, LeBron James, despite putting up 28 points and 12 rebounds, explained his effort in the third quarter, calling it “horrible.” He also fended off a question about getting more support from his teammates.

Head coach Tyronn Lue said the team has to do better in the third quarter and called the Pacers “tougher.”

With those feelings expressed Friday, James and the Cavs looked to avoid letting the series slip away. They haven’t faced much first-round controversy in a while, after all.

The Cavs’ leader in playoff points put on a big performance Sunday, tallying 32 points, 13 rebounds and seven assists. His 30-plus point night pushed him to his 100th career playoff game with 30 or more points.

LeBron James posted big numbers of 32 PTS, 13 REB, 7 AST to fuel the @cavs in Game 4 and even the series 2-2! He scored 30+ points for the 100th time in his #NBAPlayoff career, second most in NBA History (Michael Jordan – 109) #SAPStatLineOfTheNight pic.twitter.com/kLFOCLZyUs

James said he’s expected to go out and help his team win. He made sure that happened, especially late in the game during a 10-2 run.

Even with his big performance taking most of the spotlight, James couldn’t escape the usual antics between him and Lance Stephenson. During the fourth quarter, Stephenson followed James on the court back toward his bench. Having enough of that, James proceeded to shove Stephenson, and the officials issued LeBron a technical foul with the Cavs down by two.

LeBron said he shouldn’t have received a foul in the first place but also made a joke out of the situation.

Still related, as the game continued to wind down, Stephenson wrestled Cavs forward Jeff Green to the floor after going for a jump ball. It sparked some heat from fans on social media.

Cleveland faced a two-point hole with under five minutes to go in the game. Cavs forward Kyle Korver was there to save the day.

He came in clutch in the final minutes and scored eight points, dropping two 3-point shots in the process. Overall, he notched 18 points and three rebounds to help push the Cavs over the top.

Korver added several free throws and 3-pointers earlier in the game, but his late tallies made the difference.

One team will look to take a 3-2 series lead as Game 5 rolls around Wednesday. Tip-off in Cleveland is set for 7 p.m. on TNT.