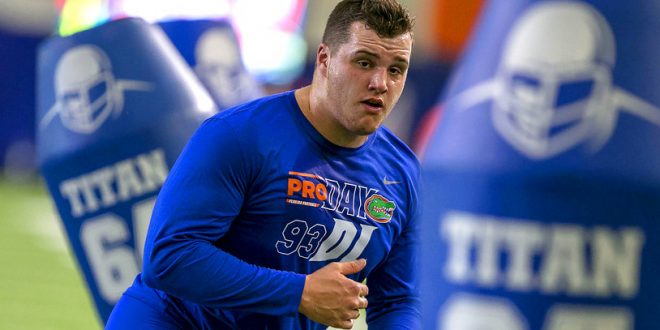 FILE - In this March 28, 2018, file photo, defensive lineman Taven Bryan works a defensive drill during Florida's Pro Day at the University of Florida in Gainesville, Fla. NFL scouts and general managers believe Bryan is just getting started. That's why he's widely considered a first-round pick and a lock to be the first Florida player chosen when the three-day draft begins Thursday night. (Alan Youngblood/Star-Banner via AP, File)

Former Florida head coach Will Muschamp recruited the three-star high school athlete out of Casper, Wyoming. Bryan was red-shirted his freshman season and appeared in 12 games the following season. In his red-shirt junior season, Bryan scored a spot in the starting lineup where he had a career best of 40 tackles and 4 sacks. In his three seasons, the defensive tackle has had 67 tackles, including 5 sacks with the Gators.

Bryan’s story is different than your typical prospect. As the son of an ex-Navy SEAL, Bryan credits his genetics and work ethic to his father. He also says that he was never a fan of the NFL growing up, or had specific players he looked up to. His inspiration came from his father.

Moving On From Gainesville

At 6-foot-5, 291 pounds, Bryan performed in the top of his class at the 2018 NFL Combine. He was one of five defensive tackles to run the 40-yard dash under the five-second mark, coming in at 4.98 seconds. He executed a vertical jump better than any other DT at 35 inches and marked a 9 feet, 11 inch vertical jump. It’s also noted that Bryan bench-pressed 225 pound 30 times, ran a 7.12 second three-cone drill and recorded a 4.4 second 20-yard shuttle.

On Thursday night in Arlington, Texas, Taven Bryan hopes to shake the hand of NFL commissioner Roger Goodell as a first-round selection in the 2018 NFL Draft. For this to happen, one of 32 teams will look beyond Bryan’s mediocre performance in his three seasons at Florida, and instead focus on the promising future of one of the most powerful, physical prospects in the 2018 draft class.