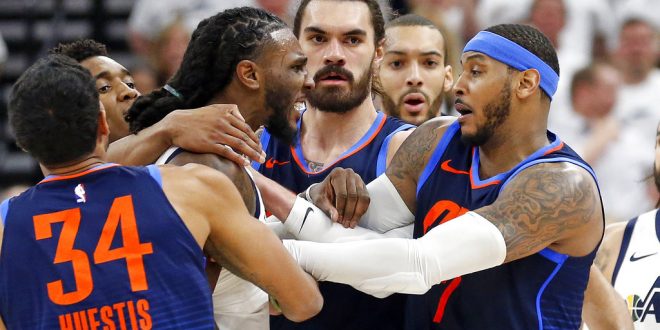 Game 5 for the opening round of the NBA Playoffs are underway. The Utah Jazz are up 3-1 in their series against Oklahoma City Thunder. Only  win away from the second round, Game 5 is crucial for the Jazz to end the series tonight. As for OKC, they have another chance to prolong their NBA Playoff run. The Thunder won Game 1, but after three straight losses, they find themselves begrudgingly playing catch-up. There was a lot of drama unleashed in Game 4. Most of it stemmed from Thunder point guard Russell Westbrook and his altercation with Utah’s center Rudy Gobert. It’s safe to say that Game 5 will be a grueling match for both teams.

Thunder point guard, Russell Westbrook, was already in plenty of foul trouble when the incident occurred. Westbrook gave Jazz player Ricky Rubio a run for his money when he fouled him four times in the first half. Fuming off the court, with one minute left in the second quarter, Westbrook found himself sitting at the end of the bench. A Jazz fan had a cardboard cut-out of Rubio’s face, and it fell off… right in front of the Thunder’s bench. Allegedly, Westbrook picked up the cut-out and pretended to crumble it. Four fouls deep into the first half and ruffling feathers of his opponent’s fans, one would think Westbrook was done performing.

Russell Westbrook didn’t make headlines for his beef with Rubio. Instead, it was his technical foul against Utah’s Rudy Gobert in the fourth quarter. Westbrook was at the scorer’s table to check into the game with 7:55 left in the fourth quarter. Thunder guard Raymond Felton fouled Gobert in the groin. Westbrook rushed the court and began mouthing off to Gobert. Westbrook slapped Gobert’s hand during the altercation. The question is if Westbrook was waived onto the court by the referees, or if he was coming out to defend his teammate, Felton. Regardless, with his early game foul count, attitude on the bench, and a technical foul, Westbrook was in trouble. The league issued a $10,000 fine for his technical foul, but he will not be suspended for the rest of the series.

Oklahoma City’s Russell Westbrook has been fined $10,000 by NBA and issued technical foul for incident with Utah’s Rudy Gobert in Game 4 last night.

Game 5 will determine if the Jazz wins the series, or if the teams will face off for Game 6 on Friday. Tonight’s game is at the Chesapeake Energy Arena in Oklahoma City, Oklahoma at 9:30 pm. Thunder coach, Billy Donovan is excited about the team’s chance to continue to compete.