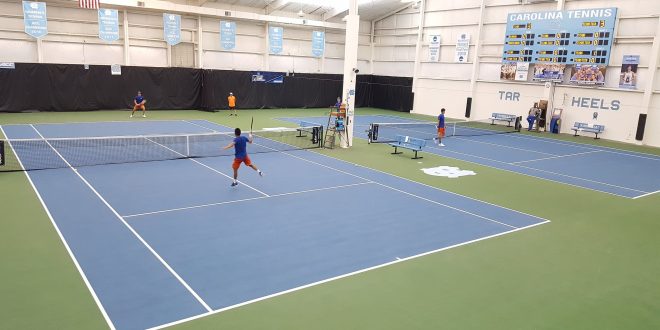 For the third consecutive year, the Florida Gators men’s tennis team is Sweet 16-bound. Following wins over South Carolina State and Miami, Florida now looks ahead to a showdown against the Ole Miss Rebels.

Keys for Success Against Ole Miss

For Florida, the NCAA Championship tournament is all too familiar territory. Appearing in 28 straight, they will once again looking to go all the way in this series. The Sweet 16, in particular, is also familiar territory. Out of the last five years, Florida has been in four. This will provide a hefty advantage of familiarity for the Gators.

Head coach Bryan Shelton is looking to continue his championship success under the Florida umbrella. He holds a tournament record of 9-5, and wants to extend that to 10 with a victory over Ole Miss.

In particular, this matchup against Ole Miss favors Florida from a history perspective. The Gators lead the Rebels in the all-time series, boasting a 37-23 record against the conference rival. They also hold a victory over Ole Miss earlier in the season, with a 6-1 win at home.

Florida will be looking to rely on Andy Andrade and Oliver Crawford for success, both with the preparations in place to deal with the jitters that follow the NCAA Sweet 16.

One big obstacle could throw a wrench in the game plans of Florida: Weather. At the time of this writing, it is unknown whether the Gators will play at Wake Forest, or possibly the campus of the University of North Carolina. As more updates become available, we at ESPN 98.1 FM – 850 AM WRUF will have the latest and breaking news on the location of this tournament matchup.

The Florida Gators men’s tennis team will be on the road for this game. They will face off against the Ole Miss Rebels on Friday at 7:30 p.m. With impending weather, there is a possibility that this game will be moving to the indoor facility of the University of North Carolina. Stay tuned for all of the latest developments as they become available. Finally, stick with ESPN 98.1 FM – 850 AM WRUF for more coverage of the men’s tennis NCAA National Championship tournament.