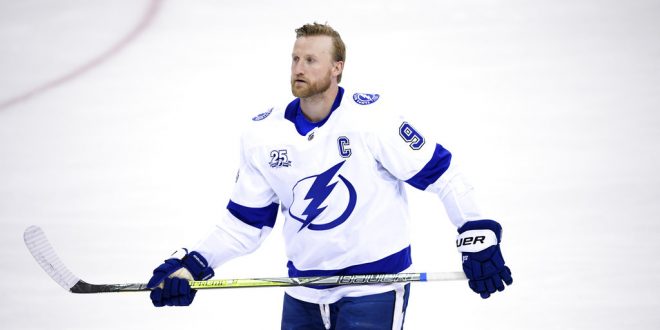 The Tampa Bay Lightning stole home ice last night in Washington, defeating the Capitals 4-2 to even the Eastern Conference Finals at  two games a piece. With strong play from Lightning goalie Andrei Vasilevskiy and captain Steven Stamkos, the Lightning go back home to Tampa looking to take the series lead over the Capitals.

The Game in Review

The game started off well for the Capitals, scoring an early goal about four-and-a-half minutes into the game off the stick of Dmitry Orlov. However, the Lightning owned the rest of the period.

Brayden Point responded to the Washington goal with one of his own, and Stamkos scored a goal off the power play. Stamkos’ goal not only gave his team the lead, it also made him the Lightning’s all-time leader in Power Play goals in the playoffs.

The Caps tied the game up at 2-2 after some beautiful passing led to a goal from Evgeny Kuznetsov. After that goal, however, Vasilevskiy dominated the net for the rest of the game.

Vasilevskiy, a Vezina Trophy finalist, finished the game with 36 saves, blanking the Capitals the rest of the game. A goal by Lightning centerman Alex Killorn gave the Lightning the lead around 12 minutes into the third. Then, an open-net goal by Anthony Cirelli put the game out of reach for the Capitals.

After the game, Lightning head coach Jon Cooper praised his goalie and expressed the role that Vasilevskiy played in getting the Game 4 victory.

The Lightning did not play without fault, however. Falling behind early in the first forced them to play catch up, and three penalties in succession allowed Washington to gain the advantage in the power play.

Overall, the Lightning were able to overcome their struggles with outstanding play by their goalie and timely scoring. With the game four win, they will look to continue this momentum the rest of the series.

The Capitals now look to regain momentum and take the series advantage as they head to Tampa Bay for game five. Finally, coverage for the game will be available at ESPN 98.1 FM – 850 AM WRUF starting at 6:45 p.m.

Jonathan is a sports journalism student at the University of Florida. He enjoys videography, editing, photography, and writing.
Previous Gators Lacrosse Out to Stamp Their Ticket to Final Four Against JMU
Next Gator Women’s Golf Ready For NCAA Championships

After defeating the Carolina Hurricanes Monday night in overtime, the Hurricanes came for revenge against …