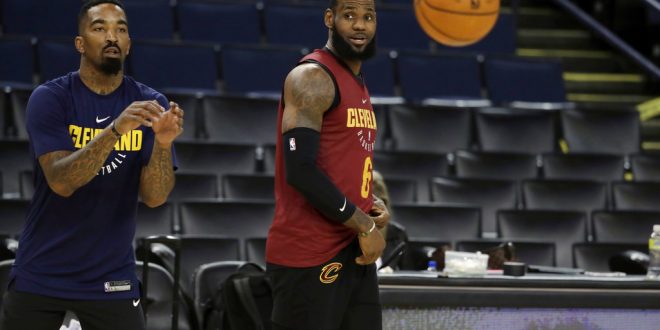 When LeBron James was questioned about the recent predictability of the last four NBA Finals, The King was quick to defend, citing both teams’ record of sustained success.

LeBron on people who think Warriors-Cavs IV is bad for the league: "If you want to see somebody else in the postseason, then you've gotta beat 'em." pic.twitter.com/jmXBIscVA0

While some NBA fans may not be avid supporters of the modern-aged “super teams,” both sets of players deserve an immense amount of credit.

The Cleveland Cavaliers endured a mid-season roster turnover in 2018. They used 29 different starting lineups throughout the regular season. Their head coach, Tyron Lue, even had to miss nine games because of health issues.

These Cavaliers have been tried, tested and doubted all season.

Meanwhile, the Golden State Warriors have had to deal with the pressures that come with being the defending champions.

Andre Iguadala wasn’t available for the majority of the Western Conference Finals. Stephen Curry missed 31 games this season due to a knee injury.

Maybe the Warriors haven’t been as surgical in this season’s playoffs as in years past, but familiar foe stands as the only remaining obstacle in their quest to become back-to-back champions.

Cleveland will welcome back Kevin Love for Game 1. The forward missed Game 7 of the Eastern Conference Finals with concussion-like symptoms.

Breaking: Kevin Love is cleared to play tonight in Game 1 of the NBA Finals. pic.twitter.com/zD2cMF7keI

Love has been averaging 13.9 PPG this postseason, his worst as a Cavalier, but the veteran forward will be a key figure throughout the series.

James is, no doubt, the catalyst for the Cavs’ postseason run. His 34 PPG and 8.8 APG are both career highs. The King is getting some necessary help in key moments.

Eyes on the prize.
Game 1 tips off in 6 hours.#NBAFinals || #WhateverItTakes pic.twitter.com/hdhNhlsLL6

Jeff Green got 19 points and 8 rebounds in Game 7 against the Boston Celtics. Kyle Korver has shown flashes of his electric three-point shooting. Center Tristan Thompson is back in the rotation after opening the playoffs on the bench.

Most critics have been adamant that James is carrying a poor team to the NBA Finals, but Lue has expressed his delight with the contributions his supporting cast of players has provided.

No matter the league-wide opinion of the Cavs’ supporting cast, they’ll need to contribute more throughout this series on both ends.

If LeBron and the Cavs hope to grab a lead in the 2018 Finals, their collective defensive intensity and ball movement on offense will be keys to watch for.

Steve Kerr’s men will be without Iguodala for Game 1. The veteran forward will be out with a knee injury, and the Warriors will now have to find other ways to guard LeBron.

Draymond Green, last season’s Defensive Player of the Year, was named to the second NBA All-Defensive team. Green recently drew praise for his defensive contributions throughout this postseason.

Green and forward Kevin Durant are both options to guard James, and it be will interesting to see how the Warriors decide to cope with the King during Game 1.

Regardless of who’s guarding James, the NBA Finals might not be as predictable as most people believe.

Considering the uncertainty surrounding James’ future in Cleveland, there is no guarantee these two teams will meet again next year.

If chapter IV is the finale in the Cleveland-Golden State chronicles, let it be a glorious one.

Sports media and management student at the University of Florida. Content creator for ESPN 98.1 FM/ 850 AM WRUF.
@TheEdgarChavero
Previous Tiger Woods Recovers To Finish Even on Day 1 at Memorial Tournament
Next Gators Prepare For NCAA Regional Opener Against Columbia