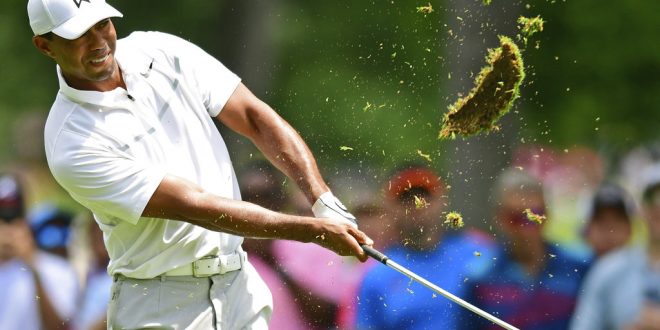 Tiger Woods follows through on his swing on the ninth hole during the first round of the Memorial golf tournament Thursday, May 31, 2018, in Dublin, Ohio. (AP Photo/David Dermer)

Tiger Woods was four over through his first seven holes today but rebounded over his final 12 holes. He finished with an even-par 72 and tied for 51st, seven strokes behind leaders Abraham Ancer and Joaquin Niemann (at the time of his finish).

Woods Struggled off the Tee Early

He started on the back nine today at Muirfield Village, and hit just one of his first four fairways. It’s something Woods has struggled with all year. An out-of-bounce off the 15th tee led to a double bogey on the par five.

An OB tee shot leads to a double bogey on the par-5 15th for Tiger Woods.

Woods followed that up with a bogey on 16. Woods was forced to make some tweaks to his swing on his back nice, citing back soreness for the changes.

The Back Nine Was a Different Story

Tiger finished strong in the tournament he’s won five times and finished in the top-five eight times. He birdied 17 on his front-nine and carried that momentum into the back.

Woods birdied two and five, six and seven and had only one bogey on the back. It still was a disappointing start, after his four top-12 finishes this season.

This was Woods’ first appearance in the tournament since 2015. He shot an 85 on his final round that year, coming in last place for players that made the cut.

Earlier rain softened the course and made easier conditions. Ancer and Niemann each hit 65s, but are surrounded by a large group. Jason Day is the most notable name near the top of the leaderboard, at five-under.

Gator alum, Billy Horschel, parred his entire front nine before making three birdies and two bogeys on his back nine to shoot a one-under 71.