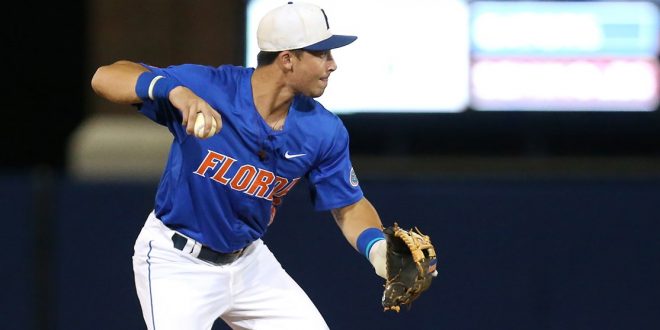 MLB Draft: Gator Players and Commits Selected On Day One

Booking a trip to Super Regionals wasn’t the only big event to happen to three Gator baseball players last night.

Junior third baseman Jonathan India, and junior pitchers Brady Singer and Jackson Kowar all heard their name called on the first day of the MLB Draft.

In addition to them, four Florida signees were also selected, marking a big day for the Gators baseball program.

Jonathan India became the first Gator off the board when the Cincinnati Reds took him with fifth overall pick. That slot has a pick value of just under $6 million.

In the first round of the 2018 #MLBDraft, the Cincinnati #Reds select 3B Jonathan India from the University of Florida! pic.twitter.com/p5FspvNub2

India was drafted back in 2015 by Milwaukee out of high school, but bet on himself by going to Florida, looking to raise his stock. Arguably no one raised his stock as much as India did this season. His junior year has seen him win SEC Player of the Year, as he’s batting .360 with a share for the team and SEC lead with 19 home runs in addition to 47 RBIs.

The Kansas City Royals obviously liked the pitching talent in Gainesville this year, as they dipped into the talent pool not once, but twice last night.

First, they drafted Florida ace Brady Singer at No. 18 overall.

6-foot-5 righty Brady Singer has been selected by the @Royals with the 18th pick! #MLBDraft pic.twitter.com/OjTgoXjPx7

Shortly after, they took fellow weekend starter Jackson Kowar with the 33rd overall pick in the first compensatory round.

Both of them came into the season as projected first round picks, and backed it up with their play throughout their junior seasons. Singer won SEC Pitcher of the Year after going 11-1 with a 2.27 ERA. Kowar was good on Saturdays as well, going 9-5 with a 3.37 ERA.

At the high school level, four Florida commits were taken on the first day.

Outfielder Connor Scott from Plant HS in Tampa went high, going 13th overall to the Marlins. He’s projected to play center field at the next level.

Ten picks later, Georgia catcher Anthony Seigler went to the Yankees. Seigler is catcher/pitcher that switch hits and switch pitches, but is likely to move up through the ranks as a catcher.

At 27th overall, the Nationals took a big arm in Merritt Island pitcher Mason Denaburg. Finally, in the second round a pick 47, the Reds went back to the Gator player/recruit pool and took pitcher Lyon Richardson from Jensen Beach.