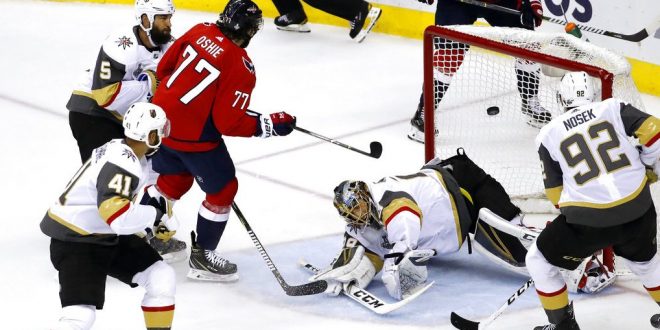 “Let’s go Caps! Let’s go Caps!” resonated from a sea of red and white. A fanbase all too familiar with heartbreak and disappointment now has something to be excited about: their team is one win away from making history.

The Washington Capitals routed the Vegas Golden Knights 6-2 on Monday night in Game 4 of the Stanley Cup Finals. Washington has now won three games in a row and extends its series lead to 3-1.

The Capitals scored three goals in all of Game 3. In Game 4, they did it in ten minutes of the first period.

They took advantage of almost every opportunity that presented itself. When the Knights made costly mistakes, they capitalized on it. Washington scored on three of their power-play chances, with goals from T.J. Oshie, Devante Smith-Pelly, and Brett Connolly.

The Knights seemed to lack the confidence and spunk they had in Game 1. They struggled offensively, going 0-for-4 on power-play opportunities and missing other chances to score. The puck pinged off the posts all evening for the Knights.

James Neal missed a (wide) open-net shot in the first period that could’ve given the Knights an early lead and a little momentum. They didn’t score their first goal until the third period, seconds after the power-play clock ran out.

Vegas outshot Washington in the second period, but they were outscored 1-0. And Goalie Marc-Andre Fleury had a rough night, with very little help from his defensemen.

Yo hockey gods, we do something to upset you or what?

Coach Gerard Gallant said there’s no making excuses as they look ahead to the next game.

Game 5 is on Thursday at 8 p.m. at the T-Mobile Arena in Las Vegas.

Camille Woodhouse is a Sports and Media student at the University of Florida College of Journalism and Communications. In the past, she has covered the Atlanta Falcons and Florida Gators football for various sports news outlets. She is an Atlanta native and a fan of football.
@CJW_SportsRadio
Previous OKC Offers More than the Women’s College World Series
Next MLB Draft: Gator Players and Commits Selected On Day One

Next Lightning goal wins the Stanley Cup in overtime of game four. They did not …