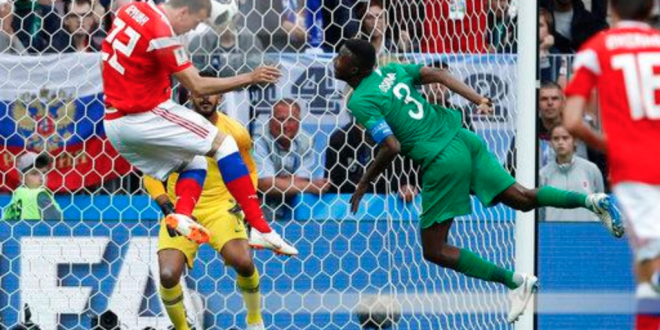 While the ceremony opened with British singer Robbie Williams controversially flipping off a camera during his opening performance, in truth, it was one of the only things that went wrong for the Russians on a special day.

The host nation’s team proceeded to dismantle a poor Saudi Arabia side at the Luzhniki Stadium in Moscow, 5-0.

Substitute Denis Cheryshev came on after Alan Dzagoev suffered a hamstring injury in the 24th minute. The Villareal FC Winger then bagged a brace in front of his home country. 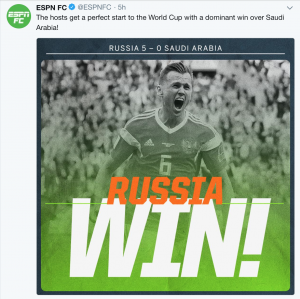 What first seemed like a promising start for Saudi Arabia evaporated quickly.

The visitors looked lively and energetic in the first 10 minutes. Juan Antonio Pizzi‘s men looked capable of giving the host country an early scare in their own tournament.

Both Saudi midfielder, Salman Al-Faraj and Taisir Al-Jassim, made a couple aggressive runs at the Russian defense to relieve some early pressure.

But after a series of mistakes in the midfield, Iury Gazinsky would head home a scrumptious cross from Aleksandr Golovin in the 12th minute, one of the 22-year-old’s three-goal contributions on the day.

Russia would double their lead in the 43rd minute when Cheryshev would use a lovely deft touch to get away from a diving defender and smash home from close range.

The Russians proved to be even more dominant in the second half.

They’d add on three more goals after the break, and Golovin capped the game off with a truly world-class free kick from just outside the 18-yard box.

Russia will have until next Tuesday to prepare for a pivotal match against Mohamed Salah and Egypt.

What to Watch for

This weekend is primed with a few exciting group-stage matches.

Three games are scheduled for Friday, and the day is headlined by Portugal’s clash against Spain at 2 p.m. ET.

As for just the first day of the tournament, no team will be happier right now than the Russians.

Sports media and management student at the University of Florida. Content creator for ESPN 98.1 FM/ 850 AM WRUF.
@TheEdgarChavero
Previous Trubisky Talks Future of the Bears, Excited About This Season
Next NFL Coaches Preparing for 2018 in NFL Minicamps