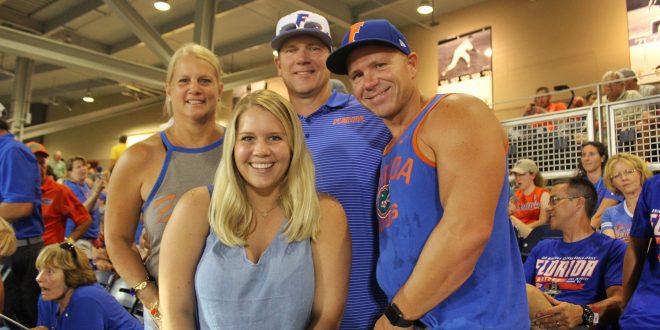 Sunday, June 17 marked Father’s Day this year and for the Florida baseball team, it didn’t go quite as planned. The Gators lost to Texas Tech in their opening game of the College World Series and their backs are officially against the wall. At a time like this, support can be huge. Lucky for the players, they don’t have to look far to fulfill that need.

Different branches of the Florida baseball family tree could be found hanging out throughout TD Ameritrade Park during the Gators’ opener. One group situated behind the third base dugout in row 28 of section 116 was the family of freshman catcher Brady Smith. In the bottom of the seventh inning, one would’ve been hard-pressed to find a louder group in the stadium when No. 9 stepped into the batter’s box to pinch hit for Jonah Girand.

Smith wound up delivering a Father’s Day gift of a base hit in his first College World Series at-bat. His father, David, said being able to play on a stage like this has always been a dream of Brady’s.

“That’s why he chose Florida,” David Smith said. “He wanted to win an SEC Championship and come to Omaha.”

The presence of Smith’s family certainly doesn’t go unnoticed by Brady himself. According to him, his family has been ever-present throughout his career.

“My dad, he’s always been there for me,” Brady Smith said. “Even when I’m playing good or playing bad he’s always pushing me to be better and be the best.”

For some other Gator dads, providing career support is seamless because, well, they’ve been in similar situations to their sons. Both Jackson Kowar and JJ Schwarz have fathers who played professionally. Frank Kowar, the father of Jackson, played for the Toronto Blue Jays organization and has been a mentor for the Florida junior to rely upon throughout his development.

“I was really blessed to have a dad that had some experience like that and was able to kind of guide me,” Jackson Kowar said. “You know, he never pushed me too hard. He was just always supportive and I really could’ve done whatever, but he’s just always been my hero so I always kind of want to follow in his footsteps.”

Jeff Schwarz, the father of JJ, flew to Omaha with other family members on Sunday, and when he returns home he’ll be making quite the drive back. When discussing the role his dad has had in his success, JJ Schwarz expressed nothing but gratitude.

“I mean he’s fully responsible for the player I am and the person I am,” he said. “I mean I can’t thank him enough.”

The Gators continue play in the College World Series Tuesday afternoon against Texas. You can listen to coverage on ESPN 98.1 FM & 850 AM WRUF and the game will also be televised on ESPN.